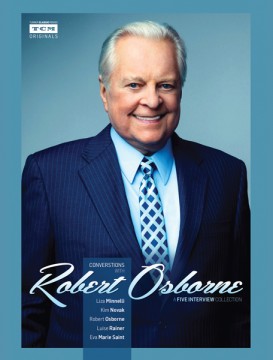 After 20 years as the face of Turner Classic Movies, host Robert Osborne has earned his moment in the spotlight.

Beginning on April 7, TCM will launch a new line of DVDs featuring Osborne’s greatest on-air interviews with classic film icons. The first release in the new TCM Originals DVD series will be Conversations with Robert Osborne, a five-program set featuring broadcast interviews with Liza Minnelli, Eva Marie Saint, Kim Novak, and Luise Rainer, plus the delightful, Alec Baldwin-hosted profile of Osborne that premiered on the network in January.

These “special programs produced by TCM and exclusive to the network” all aired as part of the Private Screenings or Live from the TCM Classic Film Festival series, and will be sold under the TCM Vault brand as manufacture-on-demand discs. The first installment is already up for pre-order on the TCM Shop webpage (for $24.99), and the listing indicates that it’s a single DVD with a running time of 460 minutes. (Even in standard definition on a dual-layer disc, squeezing more than 7 hours on to one DVD is not possible at an acceptable bitrate. My math indicates the total running time will be more like 260 minutes.) Regardless, this is a great opportunity to enjoy interviews that are not often rerun, and are (mostly) unavailable elsewhere, at an affordable price.

Here’s a summary of what’s expected on Conversations with Robert Osborne:

Recorded at the TCM studio in New York City in late 2010, Osborne’s interview with the daughter of Judy Garland and director Vincente Minnelli is fascinating, funny, and occasionally bawdy. “She’s not the person I’ve read about in so many headlines through the years,” the host says in his introduction.

Recorded live at the Egyptian Theater in Hollywood during the first TCM Film Fest in 2010, Osborne’s chat with the then-100-year-old actress was memorable mostly for Rainer’s inability to hear a word the host said, due to a forgotten hearing aid. After an awkward minute or two, an audience member suggested Osborne write out his questions for the two-time Academy Award winner (for THE GREAT ZIEGFELD and THE GOOD EARTH) and handed him a pad and pen. The results were delightful. We should all be so charming, witty and cogent at our centenaries.

Taped in 2012 at the third TCM Film Fest, Novak’s interview is perhaps the most personal and emotional of the collection. “This was something all of us at TCM have wanted to happen for a long time, and it was well worth the wait,” Osborne said about his conversation with Novak. “Kim was candid, revealing, funny, heartbreakingly honest and beautiful. The end result is one of my favorites of any interview I’ve ever had the good fortune to be a part of.”

I think this is the best piece of original programming TCM has ever done; a respectfully robust tribute to the closest thing classic film has to a “rock star.” Despite (or maybe because of) his difficult reputation, Baldwin has an extraordinary rapport with Osborne, and their witty banter sometimes feels like the kind of thing you might hear after the cameras stopped rolling. Never have I seen Osborne looser and more relaxed on camera, and the archival clips of his early acting work are a hoot. This program alone is worth the price of the DVD.

Recorded at the Avalon Hollywood during the 2013 TCMFF, Osborne’s chat with the still-working actress – she appeared in Akiva Goldsman’s WINTER’S TALE earlier this year – premieres on the network on March 31, as part of a night celebrating the 89-year-old(!) Academy Award-winner. Also airing that night are ON THE WATERFRONT (1954), RAINTREE COUNTY (1957), and NORTH BY NORTHWEST (1959).

A total of 28 episodes of Private Screenings have aired since 1996. According to IMDB, a few of those have been included as special features on DVD releases, but most are only available in their entirety when TCM airs them. Four installments of Live from the TCM Classic Film Festival have been produced, and another (with an as-yet-unnamed interviewee) is scheduled to be recorded on Sunday, April 13 at the Montalban Theater in Hollywood as part of the network’s fifth annual Film Fest.

No word yet on how many of these programs will make it to DVD, or how many releases there will be in the TCM Originals series. But I hope they’ll go all the way back to the beginning and offer some of Osborne’s early interviews with legendary figures like Esther Williams, Ann Miller, and a curmudgeonly Robert Mitchum. After nearly two decades, those programs, like their host, have themselves become classics.

UPDATE 4/02/14 – TCM officially announced this DVD series today, and said that it would be available exclusively through TCM’s online store.

Interestingly, the release made no mention of the DVDs being manufacture-on-demand (MOD).