She Works Hard For the Money: The Columbia Pictures Pre-Code Collection on DVD from TCM

Sex sells, the old saying goes. It also employs, or at least it did in movies made before enforcement of the Motion Picture Production Code began in 1934.

In the The Columbia Pictures Pre-Code Collection, a five-film DVD set from Turner Classic Movies and Sony Pictures Home Entertainment, just about every leading female character makes ends meet by leveraging what the Good Lord gave her. And those who aren’t prostitutes, madams, dance hall “hostesses,” kept women, or mistresses spend most of their time fending off predatory creeps in dead-end jobs.

In TEN CENTS A DANCE (1931), based upon the popular ballad by Rodgers and Hart, Barbara Stanwyck is a taxi dancer who marries an abusive embezzler. In ARIZONA (1931), Laura La Plante is a good time girl of a certain age (27!) who falls for womanizing West Point cadet John Wayne (yes, that John Wayne), only to marry his 40-something adopted father when the young soldier kicks her to the curb. Doomed starlet Jean Harlow headlines THREE WISE GIRLS (1932) as a small town soda jerk who tries to make her fortune as a New York City lingerie model, and instead falls for a married lush. Stanwyck strikes back in SHOPWORN (1932) as a waitress sent to the pokey by rich boyfriend Regis Toomey’s snobbish mother (Clara Blandick – Aunt Em from THE WIZARD OF OZ) for violation of the Public Morals Act, only to take a “post-graduate course” in bad behavior once she busts out. And comely comedienne Carole Lombard plays it straight as a reformed streetwalker who falls for dimwitted cabbie Pat O’Brien in VIRTUE (1932). 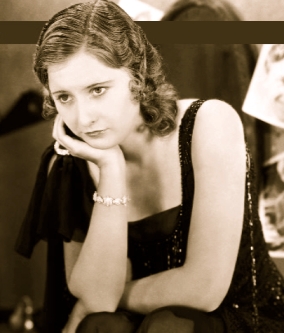 Every few months between the spring of 1931 and fall of 1932, Columbia Pictures shocked moviegoers with these increasingly bleak portraits of Depression Era womanhood. Ironically, four of the five often-lurid films in this set were written by Robert Riskin, who penned heart-warming screenplays for Frank Capra classics like IT HAPPENED ONE NIGHT (1934), MR. DEEDS GOES TO TOWN (1936), and YOU CAN’T TAKE IT WITH YOU (1938). The only film not written by Riskin, TEN CENTS A DANCE, features a screenplay by his frequent partner Jo Swerling, another Capra crony who contributed to the script for IT’S A WONDERFUL LIFE (1946). And to make matters even more creatively incestuous, DANCE was directed by Lionel Barrymore – Mr. Potter himself.

Capra, who classed up Columbia with 20 films directed between 1928 and 1939, didn’t helm any of these potboilers (TCM highlights his Pre-Code work in another box), though a number of his tropes are on display: the young, working class hero(ine) seeking her fortune; inter-class romance; abuse of authority; consideration of suicide; the redemptive power of love; and, of course, the uplifting conclusion. Because these are Columbia Pictures, not Warner Bros. or First National, each of our heroines SPOILER ALERT! enjoys an unequivocal happy ending, though her collective journeys are arguably more harrowing than anything male Capra heroes like George Bailey, Jefferson Smith or Longfellow Deeds would endure. 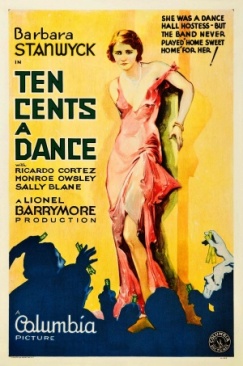 These early, sometimes roughly produced Columbia talkies are far more a product of go-for-broke Pre-Code filmmaking than the Capra Style Guide, however. Movies made during this all-too-brief era (1930-34) are often heralded (by me) for presenting strong female characters with liberated ideals unheard of in real life. But these films are more regressive, with a perverse pile-on pervading the narratives that feels more admonitional than aspirational. The primary identity for these heroines as subjects of desire seems tragically exploitive, which was a common argument made by detractors of the highly sexualized Pre-Code Zeitgeist. It’s one I myself have never considered, perhaps until now.

The alternate argument is that Pre-Code movies offered a frank assessment of the steep climb young American women faced in the early 1930s – challenges that were rarely pretty, or neatly resolved after 68 minutes. Was the female moviegoer made stronger by the knowledge that every Tom, Dick and Harry wanted to get into her pants (or skirt, considering the era)? Or was she better served by the absurdly courtly fantasies propagated by the Code? I still believe it’s the former, though perhaps now with an asterisk. 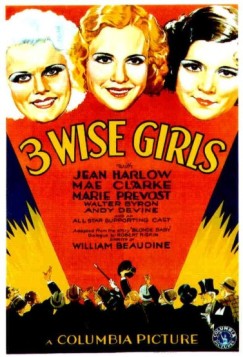 If you crave the prurience of Pre-Code, these selections won’t disappoint. In fact, The Columbia Pictures Pre-Code Collection is arguably more on-point for fans of the era than the recent Forbidden Hollywood releases from the Warner Archive Collection, both of which felt padded with at least one head-scratcher (I’m looking at you, MISS PINKERTON). The Columbia box contains five prototypical samples that would pass any Sex & Scandal litmus test, with powerful performances from some of the most interesting actresses of the 1930s (and a few, like Harlowe and Marie Prevost, who didn’t survive the ’30s). The difference is that the Pre-Code films I’ve seen from Warner Bros. and its First National subsidiary are a lot more fun to watch than these snappy but bleak soap operas. Still, I enjoyed these films, particularly the two with Stanwyck. But my recommendation comes with a warning: don’t binge-watch like I did. By the end of 348 minutes I was ready to join Mae Clarke’s character in THREE WISE GIRLS when she offed herself with a swig of poison. And I’m not a girl, and it’s not 1932.

Regarding running times, it’s important to note that at least two transfers in this set appear to be edited versions censored by the Production Code Administration for post-1934 re-release. VIRTUE has been partially restored, with the reinstatement of the audio (but not the picture) for the opening scene in which Lombard’s identity as a prostitute is confirmed. (A text screen on the DVD explains this, blaming the edit on the Code). SHOPWORN seems to be the most altered, and even a cursory viewing suggests that large stretches of narrative are missing. To compensate, TCM includes a still photo from an edited sequence in the special features with the accompanying text, “This scene does not appear in the final film,” but with no explanation of why. Did the scene actually appear in the initial release? If so, when was it removed, and why, and by whom?  All of this information must exist in Columbia’s files.

The SHOPWORN disc does include a pdf file of New York Censor Board documents outlining the specific cuts required in order for the film to play in the Empire State in 1932, but that’s only part of the film’s bowdlerization history. I want to know the rest. And while the arbitrary absurdity of a 1930s censorship document is interesting, the battle over SHOPWORN would have been better explicated in an on-camera segment than a pdf attachment. TCM host Robert Osborne does appear in an extremely brief introductory video, but makes no mention of the fact that at least two of the films in The Columbia Pictures Pre-Code Collection are not, in fact, presented in their original Pre-Code versions. Instead, he offers a perfunctory history of chief censor Will Hays and the office that bore his name, along with one- or two-sentence intros for each film. For a box set that’s all about film censorship, I wish TCM had done a deeper dive into the topic. An informative text article by Frank Miller, author of Censored Hollywood: Sex, Sin and Violence, is included on the first disc, but it requires clicking through 15 screens to read it, which I think most people are disinclined to do on their TV sets.

Other than the Miller article, pdf and Osborne intro, special features are limited to scans of publicity stills, lobby cards and movie posters. If original trailers weren’t available, how about including a racy short or two – Columbia certainly made plenty of them – or a background piece on the studio’s Poverty Row history? DVD sales may be decreasing, but one way to keep them strong with classic film fans is to give us content we can’t get anywhere else, and special features that are actually special. Close captioning and animated menus with music would also be nice. Still, silent menus feel very retro, and not in a good way.

One final note: the packaging for this set, while stylish, contains the least intuitive DVD storage mechanism I have ever encountered. I eventually figured it out, but simple directions that state “push down on the disc to release the catch” should be included in future pressings.

24 Responses to She Works Hard For the Money: The Columbia Pictures Pre-Code Collection on DVD from TCM