“Everything you’re going to see today has never been screened before,” film historian David Stenn said on Sunday at the Museum of Modern Art.

These are words most film fans only dream of hearing. But when they’re spoken by the biographer of Silent Era superstar Clara Bow, and the program he’s introducing includes a Bow film largely unseen for 88 years, well, it just doesn’t get any better.

And Sunday’s rarities, part of To Save and Project: MoMA’s 13th International Festival of Film Preservation, did not disappoint. The program included: the world premiere reconstruction of GET YOUR MAN (1927), directed by Dorothy Arzner and starring Bow and Charles “Buddy” Rogers; a “suppressed” MGM short produced for a notorious, in-house sales convention; and an excerpt from a 1948 newsreel featuring Ingrid Bergman, Rita Hayworth, and Hedy Lamarr performing at a U.N. benefit in France.

For Stenn, the program brought together topics he’s been covering for more than two decades. As Dave Kehr, MoMA’s adjunct film curator, said in his introduction, these three films provided a fascinating look at some “dark corners and bright corners” of Hollywood history.

First up was a short film produced by MGM for attendees at a 1937 sales convention and largely unseen since, due to rape accusations by an underage actress hired to entertain visiting conventioneers. Nearly seventy years after Patricia Douglas (unsuccessfully) filed the first federal civil suit for rape in American history, Stenn brought her story to light, first in a 2003 Vanity Fair article, then in his 2007 Sundance Film Festival documentary GIRL 27.

In the raucous, 16-minute, industrial-style short, boozy salesmen travel across country in MGM’s private train car (with comely female hostesses along for the ride), are welcomed as heroes with a tickertape parade on the studio lot, and join stars like Clark Gable, Jean Harlow, and Charles Boyer for lunch. Sadly, a closing night bacchanal on the backlot of neighboring Hal Roach Studios ended in violence for Douglas, who fought unsuccessfully for justice.

“MGM bought off everybody and she went into hiding and didn’t emerge again for 66 years,” Stenn said. “It’s an opportunity to see a studio at work in its darkest and most malevolent way.” 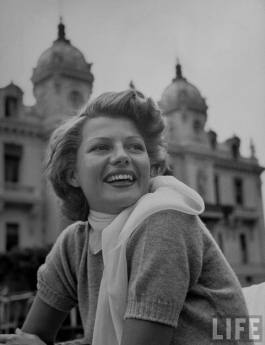 Next on the program was a previously unseen segment shot for a 1948 Hearst newsreel, featuring Rita Hayworth, Ingrid Bergman, and Hedy Lamarr — three women who, according to Stenn, were about to bring on the end of Hollywood’s “stranglehold over the morality and conduct of the people that worked there.”

Within a year of the charity event captured by newsreel photographers, Hayworth fled Columbia Pictures “to Hollywood’s horror” to marry Muslim Prince Aly Khan. Seven months later they had a child, Princes Yasmin Aga Khan. Also in 1949, Bergman became pregnant with the child of director Roberto Rossellini, despite the fact that both were still married to other people. That earned the Oscar-winning actress a rebuke on the floor of the U.S. Senate and a very public divorce scandal. And legendary beauty Hedy Lamarr turned 35, which Stenn said, was “unconscionable” in Hollywood at the time. (Some things never change.)

“Rita Hayworth and Ingrid Bergman had big comebacks,” Stenn added, but “studios could no longer control their stars the way they once had.”

The headliner of Sunday’s program was the 35mm Library of Congress restoration of GET YOUR MAN, a typically charming Bow vehicle, and the third Paramount feature for trailblazing director Arzner. Four of the film’s six “disintegrating” reels were rescued by LOC and preserved decades ago, but the twenty or so missing minutes lost to nitrate decomposition have kept it out of circulation ever since.

“The dilemma with film preservation has always been, ‘What do you do with an incomplete film?’” Stenn said. “And the answer has been, pretty much, nothing.”

With Stenn’s assistance – and funds he helped raise – the Library of Congress has reconstructed the film, combining the rescued reels with artfully rendered “key” still photographs and inter-titles from the Academy of Motion Picture Arts and Sciences to fill in the narrative gaps. MoMA was involved in the process as well, contributing three sequences of missing footage acquired from a private collector. The result is a 57-minute print, complete and viewable for the first time in generations. And to make matters even more historic, Sunday’s premiere screening was accompanied on piano by Donald Sosin, using an original music cue sheet and vintage-style sound effects.

The reconstructed GET YOUR MAN flows remarkably well, far better than other films I’ve seen with photos replacing lost footage (like the restoration of George Cukor’s A STAR IS BORN). And Bow’s unique charisma is on full display in this predictable, yet utterly charming programmer. 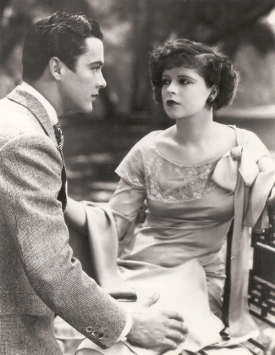 Bow is Nancy Worthington, a liberated (of course) American in Paris who meets cute with French nobleman Robert Albin (Rogers) while on vacation by herself. (Quel scandale!) Robert and Nancy fall hard for each other, but an arranged, politically motivated marriage stands in their way. Faster than you can say “moxie,” Nancy scams her way onto the family estate and into a Preston Sturges-style happy ending.

GET YOUR MAN plays like an alternate reality version of MGM’s THE STUDENT PRINCE IN OLD HEIDELBERG – released just weeks later – with Bow as the anti-Norma Shearer. Bow’s character is determined to succeed in her quest, and the audience can’t help but root for her and, according to Stenn, be inspired by her.

“People say the Sexual Revolution was in the 1960s, but really it was in the 1920s and (Bow) was the foremost revolutionary of all,” Stenn said. “GET YOUR MAN was a complete flip of courtship rituals that had no precedent.”

Also without precedent was the creative force behind the camera, 29-year-old Dorothy Arzner, the only woman directing at the major studios at that time. Stenn said that the two got along well, despite Arzner’s tight rein on Bow’s tendency toward “fun” with members of the opposite sex. The end result is a “more restrained,” historically significant Clara Bow film that now is available for new and old fans to enjoy for the first time in generations.

“In the old days, film archives were a little bit like Bosnia and Herzegovina – there wasn’t a lot of cooperation,” Stenn said. “GET YOUR MAN serves as a paradigm for what can happen in the future, so we can see films that don’t survive in their entirety. I’m hopeful that that indeed will happen.”

To Save and Project: MoMA’s 13th International Festival of Film Preservation continues through November 25. For a complete listing of all films to be screened, click here. The GET YOUR MAN program repeats on Thursday, November 19 at 4 p.m. accompanied by Ben Model (without Stenn’s introduction). 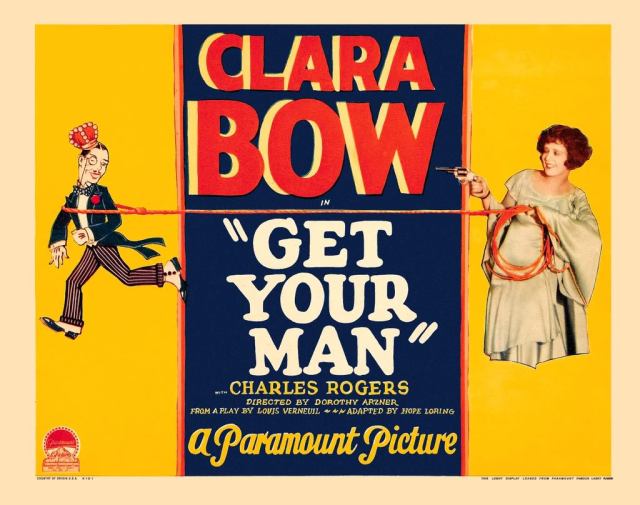 I'm a New York City-based writer, video producer, print journalist, radio/podcast host, and social media influencer. I've been a guest on Turner Classic Movies (interviewed by Robert Osborne), NPR, Sirius Satellite Radio, and the official TCM podcast. My byline has appeared in Slate.com and more than 100 times in the pages of NYC alt weeklies like The Villager and Gay City News. I'm also a social media copywriter for Sony's getTV and a contributor to four film-and-TV-related books: "Monster Serial," "Bride of Monster Serial," "Taste the Blood of Monster Serial," and "Remembering Jonathan Frid."
View all posts by willmckinley →
This entry was posted in Screening Report, Silent Film and tagged "Silent film", Clara Bow. Bookmark the permalink.

2 Responses to Girl, Reconstructed: Clara Bow in GET YOUR MAN (1927)