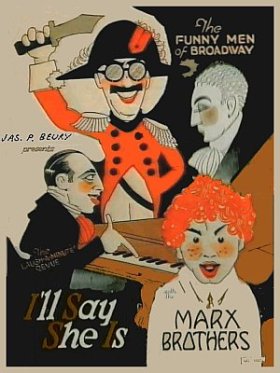 For Marx Brothers fans, I’ll Say She Is is the missing piece of the puzzle.

Written by brothers Tom and Will B. Johnstone, and incorporating some of the team’s earlier Vaudeville routines, the Marx Brothers’ first Broadway musical comedy revue opened at New York’s Casino Theatre on May 19, 1924. But unlike Cocoanuts and Animal Crackers, the brothers’ subsequent stage sensations, I’ll Say She Is never achieved immortality via film. The show closed in 1925 after a successful run, and hasn’t been revived in any form since. Not even a complete script exists.

End of story, right? Not necessarily.

In 2009, writer, performer, and Marx Brothers fan Noah Diamond began an intense research effort to piece together a complete version of the words and music of I’ll Say She Is, with the goal of returning the “lost Marx Brothers musical” to the New York Stage. Diamond, along with producer and director Trav S.D., achieved the first step of that goal last night, with a staged reading of the reconstructed work in front of packed house at the Players Theatre in Greenwich Village.

Presented as part of Marx Fest, a month-long celebration of Groucho, Harpo, Chico, and (sometimes) Zeppo in New York City, Diamond’s reconstruction of I’ll Say She Is has been assembled from a variety of sources: a 32-page rehearsal outline from 1923; existing music for roughly half the songs in the original production; the script from a 1931 Paramount promotional film that recreated the opening comedy sketch; period newspaper clippings that described scenes or quoted dialogue; and Diamond’s “Marxist intuition.”

Diamond’s dramaturgical accomplice in these efforts was musicologist Margaret Farrell, Will B. Johnstone’s great-granddaughter and the “custodian of his creative legacy.” To fill in some gaps in I’ll Say She Is, Diamond and Farrell repurposed existing music from other Johnstone revues, with new, Marxian lyrics added.

Based on last night’s show, performed on the tiny stage of the Players Theatre with songs, dancing, and actors in full costume (including Diamond as Groucho, with greasepaint mustache), I’m happy to report that the result is a complete delight. While elements of the script are familiar, the reborn I’ll Say She Is is the closest thing to a new Marx Brothers work we will ever see. 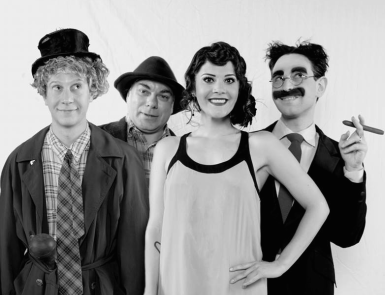 “Society Woman Craves Excitement!” exclaims a newspaper headline in the Times Square office of a theatrical producer as the show opens. Zeppo (Matthew Curiano), Chico (Robert Pinnock), Groucho (Diamond), and Harpo (Seth Shelden) enter separately and audition with a Jolson imitation (in the sequence from THE HOUSE THAT SHADOWS BUILT, the 1931 film that recreates this bit, the brothers imitate Maurice Chevalier). Groucho and the boys next perform the title song, with Harpo accompanying on the horn.

The titular “She” in I’ll Say She Is is Lotta (Melody Jane), the beautiful niece of wealthy widow Mrs. Ruby Mintworth (Kathy Biehl). Like all self-respecting Flappers, Lotta is dedicated to the pursuit of  “cheap thrills,” and, not surprisingly, the brothers are equally dedicated to helping her find them. They show up at Mrs. Mintworth’s Park Avenue digs to offer their services (and steal the silver), and Zeppo (here the romantic lead, as he was in the Brothers’ Paramount films) dispatches Lotta to the Financial District. There they meet the Fairy of Wall Street, which leads to “The Wall Street Blues,” a musical number featuring a dance specialty that equates financial investment with gambling (some things never change).

During a visit to Central Park (featuring a ballet of statues), Chico hypnotizes Lotta into thinking she’s Josephine, the empress of the French. Her husband Napoleon is portrayed by Groucho, in a scene the brothers often said was among the funniest they ever performed. Like in Animal Crackers, the chorus greets Groucho with “Hail Napoleon,” a song that mines both “Hello, I Must Be Going” and “Hooray For Captain Spaulding” for inspiration. And the dialogue between the duplicitous Josephine and her husband is reminiscent of the scene in the college widow’s apartment in HORSE FEATHERS (1932), for which Will B. Johnstone received a co-screenwriting credit. 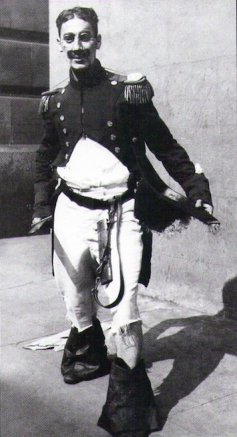 For the more obsessive Marx fan, the text of the “Napoleon’s First Waterloo” sketch exists in various different versions, and was recreated in print in The Groucho Phile: An Illustrated Life (1976) and in animated form for The Mad Mad Mad Comedians, a 1970 Rankin Bass TV special featuring the voice of Groucho (at age 80). It appears that Diamond has interpolated these (and perhaps others) for the version used in the show.

Act II of I’ll Say She Is picks up in Lotta’s reception room. Mrs. Mintworth chastises her niece for “running around the city unescorted” with Zeppo and the boys. Following a musical sequence in which the dowager sings about her palatial home’s interior design, Lotta wishes for a fairy to make her dreams of glorious poverty come true.

“Here I am,” Groucho says. “A regular Union fairy.”

Groucho waves his wand, Lotta becomes “Cinderella Backward,” and she ventures off to “Broadway at night,” leaving Groucho and Mrs. Mintworth together for a familiar scene of Margaret Dumont-esque verbal abuse. Lotta ends up in a Chinatown Opium Den, hitting the pipe with “characters of easy virtue” as a specialty dancer performs an Apache Dance, while removing “most of her clothing.” The Hop Merchant is shot, an Irish cop (who would be played by Robert Emmett O’Connor, had I’ll Say She Is been filmed) busts Lotta, and drags her to court before Judge Harpo. Lotta gets off and the cop heads to Park Avenue to investigate Mrs. Mintworth’s stolen silverware, leading to the knife-dropping routine that would later be recreated in Animal Crackers. The show ends with a full cast reprise of the title song featuring some meta lyrics about the audience being happy it’s over.

As someone who has been fascinated by this show ever since I first read about it as a nine-year-old kid, all I can say is wow. Noah Diamond has done every Marx Brothers fan a huge service here and, while we will never know exactly how I’ll Say She Is looked and sounded in 1924, Diamond and Trav S.D. have gotten us closer than I would ever have thought was possible.

There’s one more chance to see I’ll Say She Is on Sunday, May 25 in an encore of the Marx Fest staged reading, followed by a panel discussion with cast and crew. But even better, Trav S.D. announced that the show will be receiving a full staging as part of the New York International Fringe Festival in August. Performance dates are still to be announced but, if you love the Marx Brothers, I strongly suggest you plan a trip here to see it.

For more information on I’ll Say She Is, visit the show’s website. Marx Fest continues through May 31.

I'm a New York City-based writer, video producer, print journalist, radio/podcast host, and social media influencer. I've been a guest on Turner Classic Movies (interviewed by Robert Osborne), NPR, Sirius Satellite Radio, and the official TCM podcast. My byline has appeared in Slate.com and more than 100 times in the pages of NYC alt weeklies like The Villager and Gay City News. I'm also a social media copywriter for Sony's getTV and a contributor to four film-and-TV-related books: "Monster Serial," "Bride of Monster Serial," "Taste the Blood of Monster Serial," and "Remembering Jonathan Frid."
View all posts by willmckinley →
This entry was posted in Classic Film and tagged Groucho Marx, I'll Say She Is, Marx Brothers, Musical, Noah Diamond. Bookmark the permalink.