For a generation of fans old and new, Turner Classic Movies has been like film school without the student loans. Now, more than two decades after the channel’s launch, you can remove like from that sentence.

On June 1, TCM will become an actual educational institution (of sorts) when it launches Into Darkness: Investigating Film Noir, a on-line course presented in conjunction with Indiana’s Ball State University. The nine-week eLearning class will explore “the means, motives, and opportunities that led Hollywood studios to make these hard-boiled crime dramas” and will be taught by Richard L. Edwards, Ph.D., co-author of The Maltese Touch of Evil: Film Noir and Potential Criticism and co-host of the Out of the Past: Investigating Film Noir podcast (with TCM staffer Shannon Clute).

And best of all, the course is entirely free – and it’s open to non-TCM subscribers. (TCM promises “free links to online public domain films noir, so anyone can participate fully.”)

TCM isn’t fooling around with this thing, either. All those who complete the course requirements – which the network says will take 2-4 hours per week (plus some movie viewing, obvs) – will receive a certificate of completion and a carton of Lucky Strikes (I made that last part up, but they should consider it.) Participants will also have access to exclusive “video lessons” and Google Hangouts (live or archived for later viewing) where they can interact with the instructor and other students. There will be a social media component as well, using the #Noirsummer hashtag. (Thankfully, Twitter’s 140-character limit will prevent a lotta backtalk from lippy broads.)

And if you’re one of those people who thinks “school” and “summer” should never occupy the same phrase, TCM says the course work will be flexible and that you can “choose to do as much or as little as you have time for.” (You won’t get the certificate if you half-ass it, though, and you’ll probably have to buy your own smokes.)

Investigating Film Noir will run concurrently with the Summer of Darkness programming event in June and July, during which TCM will air 120 noir films in 24-hour marathons every Friday beginning at 6 a.m. (ET). And, for cable subscribers, most of the films will be available on the Watch TCM app and website for seven days after broadcast (though not for customers of Time Warner Cable, which still doesn’t support the app). TCM says this series will offer “the deepest catalog of film noir ever presented by the network (and perhaps any network)” which I think is an understatement. From Fritz Lang’s M (1931) through Curtis Hanson’s L.A. CONFIDENTIAL (1997), the series will cover nearly 70 years of noir, and all primetime screenings (35 in total) will be hosted by the Film Noir Foundation’s Eddie Muller, who recently signed a contract with TCM and is already becoming a familiar face on the channel and at live events like the TCM Film Fest.

To cap it all off, TCM will present Billy Wilder’s DOUBLE INDEMNITY (1944) in hundreds of theaters nationwide on July 19 and 20 in conjunction with Fathom Events, with specially produced wrap-arounds featuring beloved host Robert Osborne.

Any college course that requires you to go to the movies is okay in my book, even during the summer. And if you’re lucky you’ll end up with a nice tan from your TV screen.

Registration for Into Darkness: Investigating Film Noir is open now. Fedoras are not required for students, but are strongly recommended. 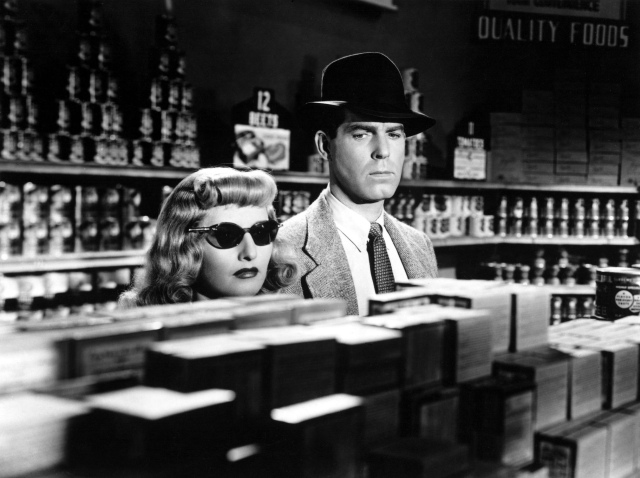 I'm a New York City-based writer, video producer, print journalist, radio/podcast host, and social media influencer. I've been a guest on Turner Classic Movies (interviewed by Robert Osborne), NPR, Sirius Satellite Radio, and the official TCM podcast. My byline has appeared in Slate.com and more than 100 times in the pages of NYC alt weeklies like The Villager and Gay City News. I'm also a social media copywriter for Sony's getTV and a contributor to four film-and-TV-related books: "Monster Serial," "Bride of Monster Serial," "Taste the Blood of Monster Serial," and "Remembering Jonathan Frid."
View all posts by willmckinley →
This entry was posted in TCM and tagged TCM. Bookmark the permalink.