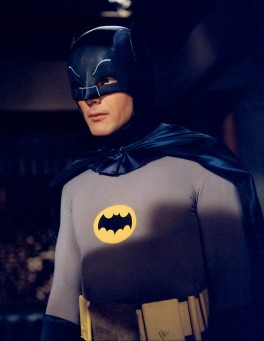 Somebody re-cut the awful, ponderous trailer for Zack Snyder’s BATMAN v. SUPERMAN: DAWN OF JUSTICE (2016) with the decidedly non-ponderous Christopher Reeve as Superman and Adam West as Batman.

Cinema geek Bobby Burns on YouTube intercut scenes from Richard Donner’s SUPERMAN: THE MOVIE (1978) and Richard Lester’s SUPERMAN II (1980) with the Batman film Fox released in the summer of 1966 to capitalize on the runaway success of the TV show. (Despite what some outlets have reported, there are no clips from the Adam West TV series, which debuted in January of 1966 on ABC, in this parody, just the movie spin-off.)

Also featured from Leslie H. Martinson’s BATMAN (1966): Burt Ward as Robin, Lee Meriwether as Catwoman (in disguise as Soviet journalist Miss Kitka from “The Moscow Bugle”), and the Batmobile, Bat-Copter, and Bat-Signal. The unforgettable “Some days you just can’t get rid of a bomb!” scene also gets its moment, as does a sample of the theme song.

From SUPERMAN II we see Terence Stamp as General Zod, Jack O’Halloran as Non, and Tony Sibbald as the aide who attempts to protect the president (E.G. Marshall) from the Kryptonian renegades. (Marshall’s president is visible as well, hiding in the back of the oval office protected by his staff.) We also catch a glimpse of Margot Kidder’s arm from the 1978 film, as Superman takes Lois Lane on the best first date ever. And Burns gets around the lack of fight scenes between Reeve and West by using a quick shot of the battle between Superman and Non at the Fortress of Solitude in SUPERMAN II.

Sadly, Christopher Reeve and Adam West never got a chance to team up before Reeve’s untimely death in 2004 at the age of 52. But this parody gives us a glimpse of the non-ponderous fun we all could have had if they did. It also serves as a reminder that lighthearted approaches to these iconic characters have stood the test of time. Somebody at Warner Bros. needs to remember that, as they continue to make the feature film versions of Batman and Superman mopey and depressing.

Just a reminder: “Batman” (1966-68, ABC) is available on DVD and Blu-ray from Warner Home Video. It is truly fun for the whole family.