50 Years of THE ODD COUPLE

The Odd Couple has been rebooted so many times in the last half century it’s difficult to keep track without a Felix Unger-style spreadsheet.

So, as sloppy sports reporter Oscar Madison and persnickety photographer Felix Unger move in together again, this time on CBS in the person of Matthew Perry and Thomas Lennon, here’s a look back at 50 years of “two divorced men sharing an apartment without driving each crazy.”

Neil Simon’s The Odd Couple first got together March 8, 1965 at Broadway’s Plymouth Theater, with Walter Matthau as Oscar and Art Carney (Norton from The Honeymooners) as Felix. (In the play he’s a TV news writer, and his name is spelled Ungar; don’t ask me why.) The Mike Nichols-directed production took home four Tonys, including awards for Matthau, Simon and Nichols. Jack Klugman (later to play the role on TV) replaced Matthau as Oscar, followed by Pat Hingle and Mike Kellin; Eddie Bracken (star of Preston Sturges’ MIRACLE OF MORGAN’S CREEK and HAIL THE CONQUERING HERO) replaced Carney as Felix. The show closed on July 2, 1967 after 964 performances, but the story was just beginning. 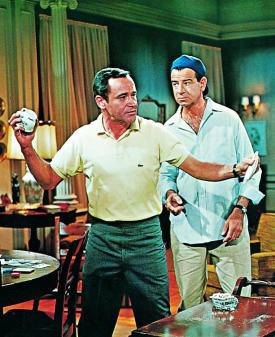 Simon wrote an Oscar-nominated adaptation of his play for Gene Saks’ 1968 Paramount film, with Matthau back as Oscar and Jack Lemmon taking on the role of Felix (the duo had co-starred previously in Billy Wilder’s THE FORTUNE COOKIE) Original Broadway cast members John Fiedler, Carole Shelley, and Monica Evans returned as poker pal Vinnie and the flighty Pigeon sisters, Oscar’s next door neighbors and objects of affection. If you’ve seen it you know Saks’ THE ODD COUPLE is the most darkly comic iteration of the story, with a lengthy opening sequence devoted to Felix’s attempted suicide that takes place off-stage in the play. Raising the narrative stakes gives the story a heightened resonance, and Felix’s on-the-ledge desperation makes his unlikely union with Oscar a legitimate life-saver, not just a narrative contrivance. (And if you haven’t seen it, it’s streaming at Netflix.)

In 1970, producer Garry Marshall brought The Odd Couple to TV, with Klugman once again as Oscar and Tony Randall as Felix. (Shelly and Evans were also back for a handful of episodes as Gwendolyn and Cecily Pigeon.) After an inconsistent first season shot feature film-style with a laugh track, Marshall began filming in front of a live audience in season 2 and the show found its voice. Supporting characters were added for TV, including Oscar’s secretary Myrna Turner (Penny Marshall), Murray the cop (Al Molinaro taking over for Herb Edelman, who played the character in the film), Felix’s girlfriend Miriam (Elinor Donahue), his ex-wife Gloria (Janis Hansen), and Oscar’s ex Blanche (Brett Somers, the former Mrs. Klugman).

And then it gets weird.

In 1975, six months after sitcom’s final episode, ABC launched an animated adaptation re-titled The Oddball Couple. Felix and Oscar were reimagined as Spiffy the cat (voiced by Frank Nelson) and Fleabag the dog (Paul Winchell, the first voice of Tigger), two anthropomorphized animals living together (and most assuredly driving each crazy) in a half mansion/half slum. The series also featured the vocal talents of one-time Stooge Joe Besser and original Scooby-Doo cast members Don Messick (Fred) and Frank Welker (Scooby). DePatie-Freleng Enterprises only produced 16 episodes of The Oddball Couple, though ABC sure got their money’s worth; the show aired weekly for two years, first on Saturday mornings, then on Sundays, then back to Saturdays. (It’s not available via streaming or DVD, but you can watch the opening sequence on YouTube.)

In 1982, just seven years after the sitcom’s cancellation, ABC dusted off old scripts and reshot them with an African-American cast. The New Odd Couple starred Demond Wilson (Lamont from Sanford and Son) as Oscar with Ron Glass (the nattily attired Det. Harris from the just-cancelled Barney Miller) as Felix. Originally conceived during a Writers Guild of American strike, this “urban” reboot eventually generated its own storylines, but even Garry Marshall’s producing and a jazzy arrangement of Neil Hefti’s iconic theme couldn’t save it from cancellation in May of 1983. (Not available streaming or on DVD, so YouTube to the rescue.)

Two years later, The Odd Couple got a sex change and came back to Broadway, with Rita Moreno (and later Brenda Vaccaro) as Olive Madison and Sally Struthers as Florence Ungar. Gene Saks directed the revival, and Simon adapted his script, changing the poker game to Trivial Pursuit and the Pigeon sisters to the Costazuela brothers (played by Tony Shaloub and Lewis J. Stadlen). The show played 295 performances at the Broadhurst Theatre, one of which included me in the audience rolling my eyes in dismay. It closed on February 23, 1986, and a tour followed. (As far as I can tell the production was never recorded, but there are dozens of clips of community theater versions on YouTube.)

Nearly 20 years after the sitcom’s cancellation, Klugman and Randall reunited for THE ODD COUPLE: TOGETHER AGAIN, a 1993 CBS TV movie also featuring Penny Marshall. Felix, now back with wife Gloria, is planning his daughter Edna’s wedding while helping Oscar recover from surgery for throat cancer (as Klugman was doing in real life). Klugman would live for 20 more years, but the illness aspect of the storyline casts a bit of a pall over the otherwise lighthearted proceedings. Still, it was a treat to see Klugman and Randall working together again, and it must have been for them, too; they toured in a revival of the play later that year.  (Not streaming or on DVD, but there’s a lengthy clip on YouTube.)

In 1998, Matthau and Lemmon staged their own wedding-based reunion in THE ODD COUPLE II, wherein Oscar’s son Brucey (mentioned in the 1968 film but never on the TV series) and Felix’s daughter Hannah get married. Even with a script by Simon, and the renewed popularity of Matthau and Lemmon with contemporary audiences thanks to the GRUMPY OLD MEN franchise, this sequel was a flop. (You can see why at Amazon.)

In 2002, Simon updated his original play, and a revival was produced at the Geffen Playhousein Los Angeles with John Larroquette (Night Court) as Oscar and Joe Regalbuto (Murphy Brown) as Felix. This updated Odd Couple made it back to Broadway in 2005, starring a post-Producers Nathan Lane and Matthew Broderick, for 249 mostly-sold-out performances. (An amateur recording is on YouTube.)

Which brings us to 2015, and the new CBS sitcom with Friends star Matthew Perry as Oscar and Thomas Lennon (Reno 911!) as Felix.

Perry and Lennon have big shoes to fill – two sets of them, in fact – and, if the first episode is any indication, they fail as miserably as Oscar and Felix’s respective marriages. Much of the fault has to fall on the flannel-wearing shoulders of Perry, who as executive producer and co-writer has generated the first reboot that doesn’t update the story or characters in any interesting way (other than making Oscar a sports talk radio host who broadcasts from his apartment in boxer shorts, and transforming Felix in a yoga-practicing vegan).

That may sound like this Odd Couple is a (somewhat) faithful homage to the original(s), which it is not. This is a crass, lazy retread that capitalizes on the history and name recognition of the characters, while stripping the property of just about every element that made previous versions memorable.

At its core, The Odd Couple is about a relationship. Call it a bromance if you like, but if that relationship is believable, the stories can go off in all sort of crazy directions and still work. Just read some plot descriptions from the ’70s series: Oscar and Felix get robbed; Oscar tries video dating and gets paired with Felix’s ex; Oscar and Felix appear on a game show, etc. It’s typical sitcom stuff, but each episode of the original series is elevated by nuanced performances by Klugman and Randall and the inherent truth in the often prickly partnership between the two characters.

When you have broadly drawn characters you have to find a way to ground them in reality, and make them pleasant to visit with each week. Matthau and Klugman played jerks, but they were charming jerks; Lemmon and Randall found a way to be neurotic but still lovable. On TV, larger than life supporting characters like Myrna and Murray the Cop were portrayed with idiosyncratic legitimacy, even when reality was heightened for comedic impact. None of that depth is here.

There was a sort of musicality to Matthau’s Oscar, his voice rising and falling as Felix drove him increasingly crazy. Perry delivers all his lines with a strained urgency that feels desperate and quickly descends into a sort of white noise. He wanders through the the first episode like he’s on his way to another show, and his third act epiphany is straight out of sitcom writing school (complete with the canned “awww” from the nonexistent audience). 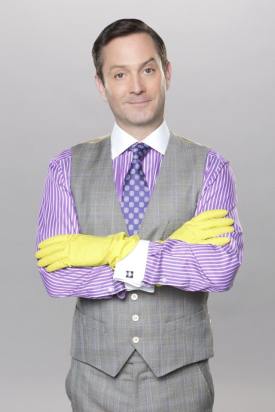 But the bigger disappointment is Lennon, whose Felix is a one-dimensional cartoon, betraying what should be his character’s amusingly tragic origin story with dumb jokes. Part of what makes the premise of these two polar opposites living together believable is that Felix truly has “nowhere else to go.” At least initially, he desperately needs Oscar to keep his sanity, and Oscar comes to need him. No such texture exists in this reboot, and the likelihood that these two would even be friends, let alone live together, is complete contrivance.

Garry Marshall (who is a consultant on the new show) has talked in interviews about network execs fearing that Oscar and Felix might be perceived as a gay couple. In 1970 that thought might not even have occurred to many viewers, because there were no out characters on TV. That’s no longer the case in 2015, and this Odd Couple has to navigate cultural waters that no previous version has. But the writers of the reboot have chosen to address this in the most obvious of ways, with Oscar and his poker buddies cracking mean jokes about how “gay” Felix seems. Because being gay is hilarious.

Watching that scene, one thing occurred to me: what if the 2015 version of The Odd Couple had updated the premise in a way that’s never been done before, making Felix not just effeminate, but an actual gay man who comes out in middle age and reluctantly has to split from his wife because of it. That would surely change the narrative crux of the story, but it would be a far more novel update than making him a cat, a woman, or an African-American. And it would give this show a contemporary relevance it sorely lacks.

After 50 years, The Odd Couple deserves better. As Tony Randall’s Felix would tell you, when you bungle an iconic property this badly, “you make an ass out of you and me.”

I'm a New York City-based writer, video producer, print journalist, radio/podcast host, and social media influencer. I've been a guest on Turner Classic Movies (interviewed by Robert Osborne), NPR, Sirius Satellite Radio, and the official TCM podcast. My byline has appeared in Slate.com and more than 100 times in the pages of NYC alt weeklies like The Villager and Gay City News. I'm also a social media copywriter for Sony's getTV and a contributor to four film-and-TV-related books: "Monster Serial," "Bride of Monster Serial," "Taste the Blood of Monster Serial," and "Remembering Jonathan Frid."
View all posts by willmckinley →
This entry was posted in Classic TV, Contemporary TV and tagged The Odd Couple. Bookmark the permalink.

11 Responses to 50 Years of THE ODD COUPLE