Bacall and Bogart Personal Items up for Auction 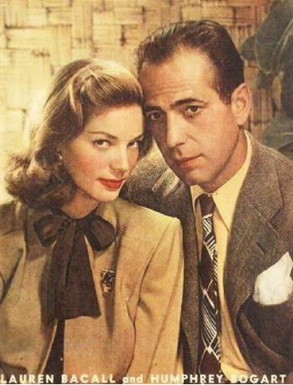 Death is a way of life for classic movie fans. And if you don’t believe me, just search YouTube for TCM Remembers (and remember to have plenty of Kleenex handy).

Seventy years after her film debut, Bacall made her final “appearance” in March of 2014 as the voice of a sultry senior on the Fox animated series Family Guy. It was a fitting, satirical end to the career of an icon whose husky pipes made her a sex symbol and who never seemed to take herself too seriously (despite our tendency to do so).

We still have Bacall’s iconic film work to remember her by, of course. But for fans who want more, on March 31 and April 1 Bonhams will be auctioning personal items owned by the actress over the course of seven decades. And the venerable auctioneer, well known to classic film fans thanks to their record-breaking TCM auctions in 2013 and 2014, announced today that the Lauren Bacall Collection will be available for viewing on a worldwide tour prior to the auction date.

The touring collection speaks to Bacall’s taste which was, in a word, classy. It includes sculptures by Henry Moore and David Graham, jewelry by Jean Schlumberger, and signed lithographs by David Hockney. But there are also a handful of lots of particular appeal to classic film fans, and they’re estimated to sell at surprisingly low prices. 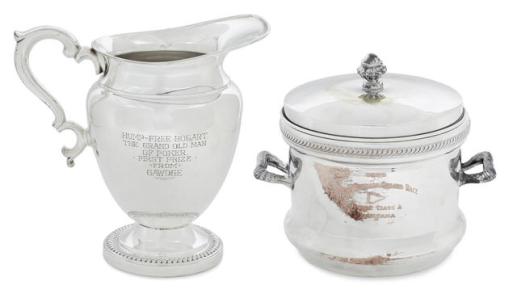 One lot includes two silver-plated “table items” presented to Bogart. The first is an engraved pitcher from his friend Spencer Tracy jokily recognizing “Hump-Free” Bogart’s prowess at poker. The second is a silver-plated bowl honoring the victory of Bogart’s boat the Santana in the 1950 Santa Barbara Island Race. In 1947 Bogart named his production company Santana Productions after his beloved yacht, and the current films made by the Bogart estate including THIS LAST LONELY PLACE (2014) are produced under the Santana banner. (Estimated price: $1,500 – $2,000)

The next is a delightful classic film trifecta: a lithograph of a painting Henry Fonda did for co-star Katharine Hepburn during production of ON GOLDEN POND (1981), his final theatrically released film. The painting, entitled “Norman Thayer Jr.” (the name of Fonda’s character in the Mark Rydell film), is of three hats Fonda wore throughout filming, including a brown Fedora Hepburn gave him on the first day of production. That Fedora had been Spencer Tracy’s lucky hat.

According to Bonhams, Fonda presented Hepburn with the original watercolor, and subsequently produced an edition of 200 lithographs of the painting. He signed, numbered and presented a lithograph to cast and crew of the film. Fonda died at age 77 just six months after the release of ON GOLDEN POND. (Estimated at $ 600 – 800.)

And finally, perhaps the most enticing of all for movie buffs: a bronze statuette of Humphrey Bogart as detective Sam Spade in John Huston’s THE MALTESE FALCON (1941), standing of a film reel.

There’s not much information in the listing about the provenance of this 14 1/4-inch “patinated bronze figure cast by the Otto Strehle foundry,” but a statuette of Bogart as Sam Spade that belonged to Lauren Bacall would make the perfect gift for any classic film fan – particularly this one. (Estimated at $ 600 – 800.)

These few items really give you a sense of the private relationships that classic film stars had. They aren’t just icons, they were real people with friendships that often stretched across decades. And the preview items in the Bacall Collection represent only a small portion of the 750 that will eventually be presented at auction, so check back at the Bonhams website as we get closer to the auction date. But whatever you do, don’t bid on the Sam Spade statue – unless you plan to give it to me. Because that one is mine.

For more information on the Bacall Collection, visit  Bonhams.com 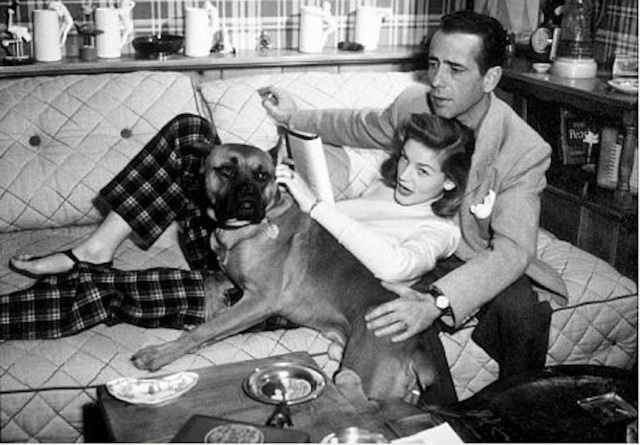 I'm a New York City-based writer, video producer, print journalist, radio/podcast host, and social media influencer. I've been a guest on Turner Classic Movies (interviewed by Robert Osborne), NPR, Sirius Satellite Radio, and the official TCM podcast. My byline has appeared in Slate.com and more than 100 times in the pages of NYC alt weeklies like The Villager and Gay City News. I'm also a social media copywriter for Sony's getTV and a contributor to four film-and-TV-related books: "Monster Serial," "Bride of Monster Serial," "Taste the Blood of Monster Serial," and "Remembering Jonathan Frid."
View all posts by willmckinley →
This entry was posted in Classic Film and tagged Bonhams. Bookmark the permalink.

2 Responses to Bacall and Bogart Personal Items up for Auction