Posted on January 9, 2015 by willmckinley

Updated 1/10/15 with additional info and links

Turner Classic Movies announced today that they will pre-empt scheduled programming on Thursday, January 29 in honor of Rod Taylor, who died on January 7 of natural causes at age 84.

TCM’s five-film tribute to the ruggedly handsome Australian actor, who enjoyed a nearly-60-year career in film and television, kicks off at 8 p.m. with THE TIME MACHINE (1960).

Set in Victorian England, director George Pal’s and screenwriter David Duncan’s adaptation of the 1895 H.G. Wells novel casts Taylor as Wells (called the “Time Traveller” in the book) and features 18-year-old MGM contractee Yvette Mimieux as his futuristic girlfriend (a member of the Eloi species in the year 802,701) and Alan Young as his friend Filby in 1900 and Filby’s son in later years. (Young, perhaps best known as Wilbur on the 1961-66 CBS series Mr. Ed, is still with us at age 95.) The MGM release won an Oscar for Gene Warren and Tim Baar’s special effects, which include an unlikely lava flow (made of oatmeal colored orange and red) that destroys London after a nuclear blast in 1966. Who knew there were volcanoes in England?

Next up at 10:00 p.m. is THE BIRDS (1963), which will likely forever remain Taylor’s best known film, thanks to its directorial pedigree. Based on a novella by Daphne Du Maurier, Alfred Hitchocock’s follow-up to PSYCHO (1960) stars Tippi Hedren as Hitch’s typically icy blonde, Taylor as the hottest lawyer in in the fishing hamlet of Bodega Bay, Suzanne Pleshette as his doomed ex, and hundreds of winged killers (real, optical, and puppet) as the title characters. THE BIRDS is a pessimistic parable of mid-century paranoia, and, thanks to the complete lack of explanation for the attacks, one of Hitchcock’s creepiest and most disturbing films.

“Rod was a great pal to me and a real strength, we were very, very good friends,” 84-year-old Hedren said in a statement to People. ‘He was one of the most fun people I have ever met, thoughtful and classy, there was everything good in that man.”

Taylor plays Mike (a role originated in the Garson Kanin-directed Broadway production by Robert Redford) and Jane Fonda, in one of her earliest film roles, is Eileen, “the only 22-year-old virgin left in the world.” They meet cute on a New York City bus and move their racy patter (for 1963) to the apartment of Eileen’s airline pilot brother (Cliff Robertson), a ladies man who has his own thoughts about appropriate behavior for ladies who happen to be his sister. Farce ensues.

Despite the controversy (at the time) over its subject matter, SUNDAY IN NEW YORK is an innocuous, old fashioned love story, and Taylor and Fonda have sweet chemistry. Even more interesting is the fact that, five years later, sexually frank films like Fonda’s own BARBARELLA would make SUNDAY look like a decades-old relic.

Interesting side note: on the first-ever TCM sightseeing bus tour in August of 2013, legendary actress Jane Powell told me that this film was her favorite movie set in New York City.

The evening continues at 2:15 a.m. with YOUNG CASSIDY (1965), based on the rowdy life of Irish dramatist Sean O’Casey (1880-1964). In the film, which was shot on location in Dublin by director Jack Cardiff (who replaced an ailing John Ford), Taylor plays playwright John Cassidy (O’Casey’s birth name) with Julie Christie and Maggie Smith as his love interests, Dame Flora Robson as his mother, Dame Edith Evans as his sponsor, Lady Gregory, and Sir Michael Redgrave as William Butler Yeats. Ford only directed about 10 minutes of the final film, but it’s still billed as “A John Ford Film.”

TCM has a short making-of documentary on YOUNG CASSIDY on the website, along with the original trailer and clips from the film.

The tribute concludes at 4:15 a.m. with THE GLASS BOTTOM BOAT (1966), Frank Tashlin’s Cold War comedy with Taylor as an inventor and Doris Day as a disaster-prone public relations rep who doubles as a mermaid 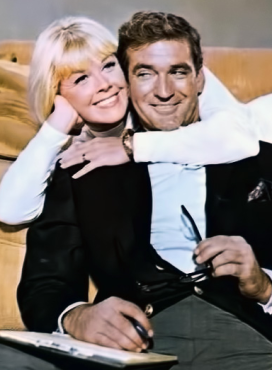 Laura from Laura’s Miscellaneous Musings also reviews a few of the films in TCM’s tribute at her site, which you can read here. And Terry Canote  has an extensive career retrospective on his blog, A Shroud of Thoughts.

Sadly missing from TCM’s retrospective is Taylor’s final, unforgettable performance on film, as Winston Churchill in Quentin Tarantino’s INGLOURIOUS BASTERDS (2009). That film is available to stream at Amazon Instant. And here’s a great 2009 interview with Taylor about his role in the film, and meeting and working with Tarantino. It includes some behind-the-scenes footage that may make you weep.

I'm a New York City-based writer, video producer, print journalist, radio/podcast host, and social media influencer. I've been a guest on Turner Classic Movies (interviewed by Robert Osborne), NPR, Sirius Satellite Radio, and the official TCM podcast. My byline has appeared in Slate.com and more than 100 times in the pages of NYC alt weeklies like The Villager and Gay City News. I'm also a social media copywriter for Sony's getTV and a contributor to four film-and-TV-related books: "Monster Serial," "Bride of Monster Serial," "Taste the Blood of Monster Serial," and "Remembering Jonathan Frid."
View all posts by willmckinley →
This entry was posted in TCM and tagged Rod Taylor. Bookmark the permalink.