Remember that sitcom with Chico Marx? Or the Pepsi commercial with Harpo Marx playing his trademark harp?  Or the time that Groucho Marx donned his greasepaint mustache for a duet with Jackie Gleason?

If you answered ‘no’ to any of these questions, you’re not alone. To date, there’s been pretty much only one Marx Bros. fan who has seen these and dozens of other rare performances from three of the most seminal figures in film comedy. That all changes this summer, thanks to The Marx Bros. TV Collection, a three-DVD set of more than 50 variety show appearances, talk show interviews, and television commercials featuring Groucho, Chico, and Harpo, some unseen since their original airing more than half a century ago.

“This is the result of members of the Marx family letting me rummage through their garages and closets, which I highly recommend,” film historian Robert Bader said during a special preview screening in New York on Sunday night, part of the month-long Marx Fest.

Bader is the curator of the new DVD set, and previously held that role on other must-have Shout! Factory Marx Bros. releases: You Bet Your Life: The Lost Episodes and You Bet Your Life: The Best Episodes, each featuring re-mastered installments of Groucho’s 1950-61 NBC game show. Bader is also the editor of Groucho Marx and Other Short Stories and Tall Tales, a delightful collection of Groucho’s writing for magazines and newspapers. The book features an introduction from Dick Cavett, who joined Bader on stage at the Players Theatre in Greenwich Village to talk about Groucho’s appearances on his ABC talk show.

“Groucho could throw you a bit,” Cavett remembered, after Bader screened a particularly frenetic segment from the late ‘60s. “But I never felt in any way uncomfortable, including the first minute we met. There are people who have that magic quality where, when you first meet them, they talk comfortably. The minute I met Groucho on a street corner in New York I thought I had known him for years.”

Happily for Cavett, he and Groucho did end up knowing each other for years. They first met in the summer of 1962 when Cavett was writing for The Tonight Show and the then-72-year-old legend was guest hosting for Jack Paar. The relationship continued when Cavett got his own ABC chat show, first in the morning and then in late night (opposite his former employer). Groucho went on to appear seven times between 1968 and 1971 with the man he called “one of the best and wittiest conversationalists” (some of those interviews are available on Shout’s Dick Cavett Show DVDs, also curated by Bader). And it was Cavett who introduced Groucho during his legendary one-man show at Carnegie Hall in 1972.

“He had a fatherly feeling toward me, I think, and I toward him in reverse,” Cavett said.

In addition to highlights from all of Groucho’s appearances with Cavett, Bader also screened eleven clips I had never seen before. All were amazing, but here are five of my favorites: 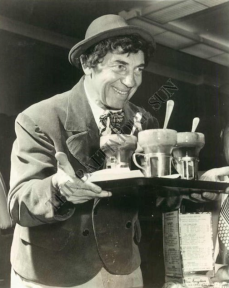 According to Bader, the notoriously broke Chico was the first brother to embrace the medium of television because, “There were two things he never had enough of: money and girls. TV had them both.”

In this sitcom/variety show, Chico, in familiar ethnic costume and exaggerated Italian dialect, plays Chico Ravelli, the manager of a malt shop where college kids congregate. The students — featuring a young Andy Williams — sing and dance and Chico, of course, plays piano. (I assume he also played with some of the female cast members, but Bader made no mention of that.) The clip screened from the final episode of the series concluded with Chico, speaking directly to camera, thanking sponsors Fresh Cream Deodorant and Silver Star Blades and promising to see the audience again “next fall.”

“The bad news for Chico was, there was no next fall,” Bader lamented. “Twenty-five weeks and that was it for The College Bowl.” 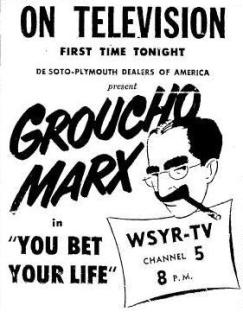 After three seasons on radio, the television version of Groucho’s quiz program debuted a few days after his 60th birthday. It was the first of 423 TV episodes, and the transition was made with few frills. In the sole concession to the visual medium, announcer George Fenneman wears the secret word on a paper sign taped to his abdomen.

“It’s basically a radio show that was being shown on television,” Bader said.

As usual, Groucho conducts a hilariously suggestive interview with Corinne and Elmer, a couple about to be married. Sample:

Corinne: “One day he finally noticed me, for some reason or other.”
Groucho: “What was the reason?”
Corinne: “I don’t know.”
Groucho: “I know, but I won’t tell you.”

“The networks didn’t know what to do with someone who wouldn’t talk on television,” Bader said. “So Harpo signed a contract with NBC on January 1, 1952, but not for his own show. The deal was that Harpo would appear on eight NBC variety shows every year. He was basically just told to come on and do something.”

The “something” Harpo does (in full costume, with horn) in this clip from an early primetime variety show is a single-set waiter sketch, with stock characters like a demanding manager, snooty dowager, and drunken playboy. Bader suggested it might have been inspired by a waiter sequence that was cut from A DAY AT THE RACES (1937).

Two years after the team’s final screen appearance in LOVE HAPPY (1949), and at the age of 63, Harpo still has every ounce of his physical comedy chops. 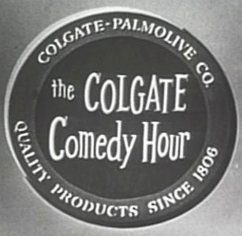 “As the guy who’s trying to find as much of their television work as possible, that was sort of a Holy Grail,” Bader said of this thought-to-be-lost episode of The Colgate Comedy Hour. “I went through the films in the children of Harpo’s collection years ago and it didn’t turn up. Then, Minnie Marx (Harpo’s daughter) had some more films in her attic, and there it was.”

In the only television variety performance Harpo and Chico did together, the duo recreate the double-piano bit they were doing in their nightclub and Vegas act. And if the comedic interaction during “The Mexican Hat Song” seems polished, it should. Bader said the brothers first performed a similar bit in Vaudeville four decades earlier, in Mister Green’s Reception (1912). ‘attsa a lotta rehearsal, boss!

Nearly two decades after the release of A DAY AT THE RACES – my favorite Marx Bros. film as a kid – Groucho sings “Dr. Hackenbush,” a song by Burt Kalmar and Harry Ruby that was cut from the film. Even better: he’s in a grease paint moustache, with a large supporting cast, on a set that resembles one from the film. And, at age 64, Groucho’s performance is flawless, and ends with him jumping up into the arms of a chorus line of nurses. It’s as if a lost scene from the film has been found, all these years later. Just amazing.

I haven’t seen the DVD yet, and I won’t for a few months. But if these clips are any indication, it’s a must-own for any Marx Bros fan. And to sweeten the deal, Shout! Factory is offering an additional fourth disc if you buy the set from their website. (Plus, you’ll get it a month earlier than if you buy it from a certain large on-line “Big Store.”)

As the evening closed, Dick Cavett shared a bittersweet story of what may have been Groucho’s last words in August of 1977, proving that he was a trouper until the end:

“The nurse went in and said, ‘How do you feel?’ And (Groucho) said, ‘Terrible. What are you doing?’ And she said, ‘I have to see if you have a temperature.’ And he said, in a very faint voice, ‘Don’t be silly. Everyone has a temperature.’ And flights of angels sang him to his rest.”

Marx Fest continues through May 31. for more information, visit their website.

Shout! Factory has released the complete lineup for the The Marx Brothers TV Collection. In addition to “a 40-page book with rare photos from the Marx Brothers family archive, program notes and an essay by Marx Brothers historian Robert S. Bader,” Shout! will also include a limited-edition poster of the box art by the great Drew Friedman.

The following a complete rundown of the collection, from Shout! Factory’s press release:

Thanks to Inside Pulse, which initially reported the disc lineup.