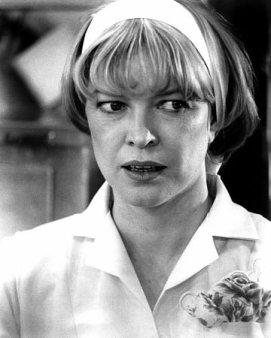 Despite winning an Academy Award for ALICE DOESN’T LIVE HERE ANYMORE in 1975, star Ellen Burstyn wasn’t offered the lead in Alice, the CBS-TV spin-off that debuted the following year and aired for nine seasons.

“I didn’t have anything to do with it; I was dumb,” she told Variety’s Scott Foundas at the Brooklyn Academy of Music on Saturday night after a sold-out screening of her ground-breaking 1974 film. “I was really stupid that I didn’t ask for producer credit. I didn’t understand at the time that, if I asked for the credit, I would be an owner.”

The 81-year-old actress confirmed that, not only was she an un-credited producer of ALICE DOESN’T LIVE HERE ANYMORE, she also chose the film’s director: a 31-year-old Martin Scorsese.

“I called my friend Francis Coppola and I said, ‘Do you know a director that’s new and exciting?’  And he said, ‘Look at a film called MEAN STREETS,’ Burstyn said. “So I asked to speak with Marty and he came into the office and I said, ‘I love your film, but I can’t tell from that if you know anything about women. Do you?’ And he answered, ‘No, but I’d like to learn.” And I thought that was as good an answer as you could ever expect from a guy. So he went to work.”

Burstyn, who said that “equal pay” and “equal opportunity” were among her lifelong causes, was asked by an audience member about the state of women in film.

“What women in film?! It’s just ridiculously imbalanced. When I did this film it was unheard of to do a film from a woman’s point of view; this was the first one. Since then there have been a few more, but not very many,” she said. “The industry is run by men and about men and for men. There are few roles for women and the roles for women over 50? I get most of them.”

The emotional evening, the centerpiece of a weeklong BAM tribute, closed with a question about Burstyn’s 2006 autobiography Lessons in Becoming Myself, in which she shares frank details of stalking and violence at the hands of her ex-husband.

“The day it was coming out I said, ‘Oh no. Why did I do this? Everyone’s gonna know everything.’ Then I heard from so many women – not just women, people – who had similar experiences and it meant an awful lot to them to read somebody who had survived­,” she said. “I still hear from people about it. So I ended up being very glad that I was so embarrassing and honest.”

The Ellen Burstyn Retrospective at the BAM Cinematek concludes on Tuesday, May 6 with SAME TIME NEXT YEAR (1978). For more information, click here.