UPDATE #2: You Pick the Cities for TCM’s Nationwide Screenings of CASABLANCA

The winning cities have been announced. Read more about it here.

Voting has closed. Check back on Tuesday, February 18 for the announcement of the winning cities.

Turner Classic Movies will bring CASABLANCA to theaters nationwide for one night only in March – and viewers get a chance to help pick the cities.

In celebration of the network’s twentieth anniversary, TCM will present Michael Curtiz’s iconic 1942 drama in twenty U.S. cities on Tuesday, March 4. Admission will be free, and passes will be available on a first come, first served basis on February 18 (details on that are still to be announced). The first ten cities have already been selected: Atlanta (of course), Boston, Chicago, Denver, Detroit, Philadelphia, Miami, San Francisco, Seattle, and Washington D.C. The remaining ten locations are up for grabs, and that’s where you come in. 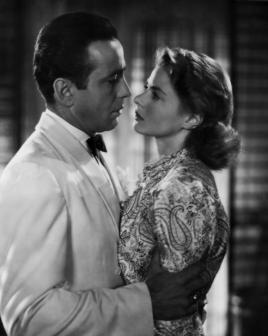 TCM has set up a voting page where you can select from more than 200 cities in all fifty states, from Anchorage, Alaska to Cheyenne, Wyoming. Maybe your name is Esther Blodgett and you live in Pocatello, Idaho and you thought TCM would never come to your city. Well, this is your big shot!

TCM does offer the following asterisked caveat: “*10 cities will be selected based on fan submission and other factors as determined in TCM’s sole discretion.” What those “other factors” are I have no idea. But the more friends, family members, neighbors, co-workers, ex-spouses, etc. who vote, the better you city’s chances of winning. So vote early and often.

No word yet on screening format, or if any of the cities will feature appearances by celebrities or TCM on-air hosts Robert Osborne and Ben Mankiewicz. But one thing is for sure: seeing CASABLANCA on the big screen in a theater filled with classic film fans can be an unforgettable experience.

And, who knows, it might even be the beginning of some beautiful friendships.

18 Responses to UPDATE #2: You Pick the Cities for TCM’s Nationwide Screenings of CASABLANCA