Robert Osborne Likes Ryan Gosling – Seth MacFarlane, Not So Much 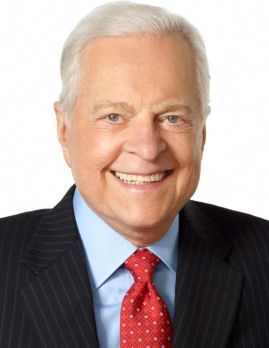 In New York City we call a guy like Robert Osborne a mensch.

“When people meet me they’re most interested in telling me something about them and their movie experience,” the TCM host told Leonard Lopate on WNYC radio today. “It seems that we’ve all got this enthusiasm about movies, and we want to share that.”

“I find that really fascinating,” added the historian, author, and patron saint of classic film.

Osborne’s interview on New York City’s NPR affiliate focused mostly on his recently-published 85 Years of the Oscar: The Official History of the Academy Awards, an extensive update to a reference book he first penned 24 years ago after the 60th Academy Awards.

“You can give up the gym now,” Osborne quipped about the hefty, coffee table-style volume. “You just carry the book around.”

The beloved face of TCM, currently celebrating 20 years with the network, discussed the history of the Academy Awards, the competing legends surrounding the genesis of the name of the statuette (which became known as “Oscar” around 1935), and the history of television broadcasts, which began in 1953.

“The first one on television lasted about an hour,” Osborne said. “You had people coming on like Clark Gable, Kim Novak, Ingrid Bergman, Greer Garson – people who never appeared on television, people who weren’t allowed to by studios.”

“It was a big deal,” he added. “Television at that point was made up of stars that had been discarded by Hollywood, or newcomers that were trying to get a foothold in the industry.”

As for hosts of the telecast, Osborne singled out Bob Hope, Johnny Carson, and Billy Crystal as favorites, but he had less complimentary words for the most recent emcee.

“I think Seth MacFarlane was not wonderful,” Osborne said with trademark diplomacy.

He also discussed the Oscar he presented to 88-year-old Angela Lansbury on Saturday at the fifth annual Academy of Motion Picture Arts and Sciences Governor’s Awards in Hollywood. The honorary Oscar was the iconic star’s first; she had previously been  a Best Actress nominee for GASLIGHT (1944), THE PICTURE OF DORIAN GRAY (1945), and THE MANCHURIAN CANDIDATE (1962).

“It was a thrill for me because I do so admire her and her work,” Osborne said.

Just try not to weep when he calls Lansbury “dear Angie” when presenting her long-awaited award. It’s pretty much impossible.

The 81-year-old all around good guy and sex symbol – and if you think I’m kidding about that last part, I can give you the Twitter and Facebook handles of at least 100 people will disabuse you of that notion – said that he tries to keep up with current films, and would see more of them if he had more time.

“Being on Turner Classic Movies I’m constantly looking at old films again, so they’re fresh in my mind when I talk about them,” he said. “But very few movies today inspire me to go out to a movie theater and pay 12 bucks.”

But there are a few Osborne said he’ll always make a point of seeing: anything with Emma Thompson, Ryan Gosling, and “any James Bond movie.”

“When we think of films we think of Hollywood,” he said. “It’s hard to get Anjelica Huston to come to Greenpoint (Brooklyn).”

You can listen to the entire, 17-minute interview here:

I'm a New York City-based writer, video producer, print journalist, radio/podcast host, and social media influencer. I've been a guest on Turner Classic Movies (interviewed by Robert Osborne), NPR, Sirius Satellite Radio, and the official TCM podcast. My byline has appeared in Slate.com and more than 100 times in the pages of NYC alt weeklies like The Villager and Gay City News. I'm also a social media copywriter for Sony's getTV and a contributor to four film-and-TV-related books: "Monster Serial," "Bride of Monster Serial," "Taste the Blood of Monster Serial," and "Remembering Jonathan Frid."
View all posts by willmckinley →
This entry was posted in TCM and tagged 85 Years of the Oscar: The Official History of the Academy Awards, Oscar, Robert Osborne, TCM, Turner Classic Movies, WNYC. Bookmark the permalink.

6 Responses to Robert Osborne Likes Ryan Gosling – Seth MacFarlane, Not So Much