Update: Audrey Hepburn Returns in Style in the Restoration of TWO FOR THE ROAD (1967)

Posted on November 1, 2013 by willmckinley 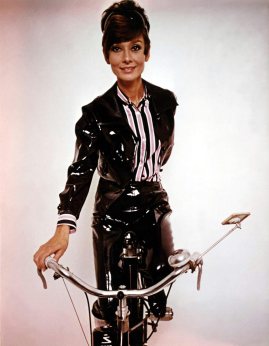 Audrey Hepburn made a stylish return to the big screen in Brooklyn this week in a little known 1967 classic – with the help of some 2013 technology.

“The goal of a restoration like this one is to try to present the film as authentically as possible, to honor the original artistic achievement of the film, and to show it the way it was shown in its original premiere,” Twentieth Century Fox’s Schawn Belston said in a taped message before a screening of Stanley Donen’s TWO FOR THE ROAD on Tuesday at Nitehawk Cinema.

It’s unlikely that movie audiences in 1967 ate tater tots whilst enjoying Hepburn’s mod fashions and Albert Finney’s roguish charm in this bittersweet romantic comedy, like I did at the Williamsburg “cinema eatery.” But that’s their loss. Equally delicious was the nearly flawless 35mm print struck from the recent restoration, which was a collaboration between Fox, the Academy Film Archive and Martin Scorsese’s Film Foundation.

“What we want to create, ultimately, is a sort of time machine back to 1967,” Belston said. “Since 1967, everything has changed — film stocks, digital techniques, and powerful tools now exist that allow us to do things that weren’t possible in 1967.” 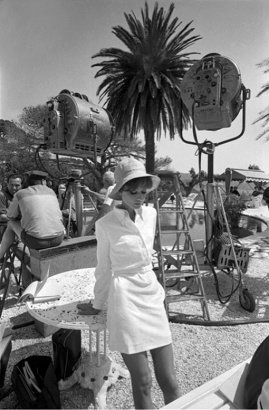 Ironically, it took those modern techniques to return this highly visual, Oscar-nominated film to its former glory. Shot by British cinematographer Christopher Challis, a camera operator on Michael Powell and Emeric Pressburger’s THE RED SHOES (1948) and D.P. on THE TALES OF HOFFMAN (1951), TWO FOR THE ROAD suffered from what Belston called “the ravages of time.” The original camera negative was scanned at 4K (basically four times the resolution of HD), then dirt, scratches and tears were electronically erased and the film was digitally color corrected. The original sound masters were also digitized and rebalanced and a 4K DCP was created for digital projection, along with a brand new film negative for preservation purposes. From that, 35mm release prints were struck “to allow the movie to be seen on film, the way it was originally intended.”

Shot on location in France in 1966, TWO FOR THE ROAD tracks the winding path of a 12-year relationship between architect Mark Wallace (Finney) and his eventual bride, the fiercely independent fashion plate Joanna (Hepburn). Donen, perhaps best known for musicals like SINGIN’ IN THE RAIN (1952), uses ingenious, non-linear storytelling techniques to chart the ebb and flow of their love, from the giddy “meet cute,” to marriage, the birth of a child, infidelity, career success, and some very Continental ennui. Often using motor vehicles as transitional devices, Donen cuts from one time period to another, juxtaposing narrative circumstances to demonstrate the inevitable compromises of a life shared with another person.

At first glance (at least for me), the structure of TWO FOR THE ROAD can be confusing, and the tonal shifts – from screwball comedy to tear-jerking melodrama – can jar, but subsequent viewing reveals the stunning precision of Donen’s work. He embeds each sequence with visual clues about the date, from a 1956 Michelin travel guide, to dated inspection stickers on the ever-changing cars, as the protagonists morph from broke hitchhikers to affluent (and often unpleasant) middle-agers. Hepburn also marks the evolution with both hairstyle and clothing, morphing from gawky, longhaired schoolgirl to bitter, unfaithful wife, armored in the highest of high fashion. (At least one of her delightfully outré outfits got a hearty cheer of approval from the Nitehawk audience).

TWO FOR THE ROAD is also well remembered for its Golden Globe-nominated soundtrack by Henry Mancini, which, like the storyline, careens from poignant to light and back again. The title track alone is reprised numerous times, from lush and welling to light and playful. Mancini rerecorded his score for a popular LP, and the haunting title track was issued as a single, with a choral vocal co-written by lyricist Leslie Bricusse.

Tuesday’s screening was the sixth in Nitehawk’s Vice Presents the Film Foundation series, presented in conjunction with Vice Magazine.  A portion of the ticket price went to fund the efforts of the Film Foundation which, according to Belston, has been “directly responsible for preserving around 600 films,” since 1990.

Still to come in the Nitehawk series are William Wyler’s THE BIG COUNTRY (1958) on Tuesday, November 19, followed by Charles Laughton’s NIGHT OF THE HUNTER (1955) on December 17 and Barbara Loden’s WANDA (1970) on January 28. All are recommended, as are the tater tots.

18 Responses to Update: Audrey Hepburn Returns in Style in the Restoration of TWO FOR THE ROAD (1967)