Twenty years ago today, Vincent Price departed the world of mortal men for the House on Haunted Hill in the sky. Sadly, unlike Dr. Anton Phibes or other of his memorable cinematic creations, the beloved actor has not returned for a sequel. Not yet, at least.

But his legacy is stronger than ever. Two decades after his death at age 82, Vincent Price has become the de facto face of “classic horror” for a new generation. Thanks to an active and prolific career that stretched into the 1990s, and included appearances in kid-friendly, contemporary classics like Tim Burton’s EDWARD SCISSORHANDS (1990) and vocal work in animated TV shows like Scooby-Doo (1985) and Tiny Toon Adventures (1991), Price is still fondly recalled today, even by younger viewers. And his memorable presence in endlessly rerun episodes of Batman (1966-67, as Egg Head) and The Brady Bunch (1972, in the three-part Tiki episode) certainly doesn’t hurt, from a visibility standpoint.

This month, Turner Classic Movies is helping to keep Price’s legacy vibrant with a brilliantly curated, 35-film retrospective of his movie career, from Michael Curtiz’s THE PRIVATE LIVES OF ELIZABETH AND ESSEX (1939) through Douglas Hickox’s THEATRE OF BLOOD (1973). The series started on October 3 and ends with a bang on Halloween night, with eight horror movies extending well into the next morning (when your Smarties high will finally begin to wear off). The network also tapped writer/director John Waters to narrate a truly brilliant promo for the series, written and produced for TCM by Christian Hammann and edited by Jay Bellissimo. You can watch it here.

Also this week, Shout Factory released The Vincent Price Collection, a Blu-ray box set featuring six fright films distributed in the United States by American International Pictures: HOUSE OF USHER (1960), THE PIT & THE PENDULUM (1961), THE HAUNTED PALACE (1963) and THE MASQUE OF THE RED DEATH (1964) from director Roger Corman, plus Michael Reeves’ WITCHFINDER GENERAL (1968, aka THE CONQUEROR WORM) and Robert Fuest’s THE ABOMINABLE DR. PHIBES. The four-disc set has tons of extras and commentary tracks on all six films, including three with Corman. It also makes an excellent birthday gift for writers of classic film blogs who may be celebrating a birthday on November 11. (Note: it’s cheaper when you order from Shout’s website than on Amazon. Just saying.)

This weekend, the Nitrate Diva is hosting a blogathon celebrating Price and his nearly six-decade career. I’ve contributed an article on THE TINGLER (1959), the second of two “gimmick” films the actor made with my idol, producer/director/marketing genius William Castle. My piece is a guest post for The Collinsport Historical Society, a blog devoted to horror with a particular emphasis on the 1966-71 ABC-TV series Dark Shadows.

You can read the article here.  Thanks to my friend Wallace McBride, aka Cousin Barnabas, for inviting me to write it.

In my piece I mention that my movie poster collection includes a number of original release posters from William Castle films. Below is the photographic proof, from the apartment I share with my lovely (and extremely understanding) girlfriend. 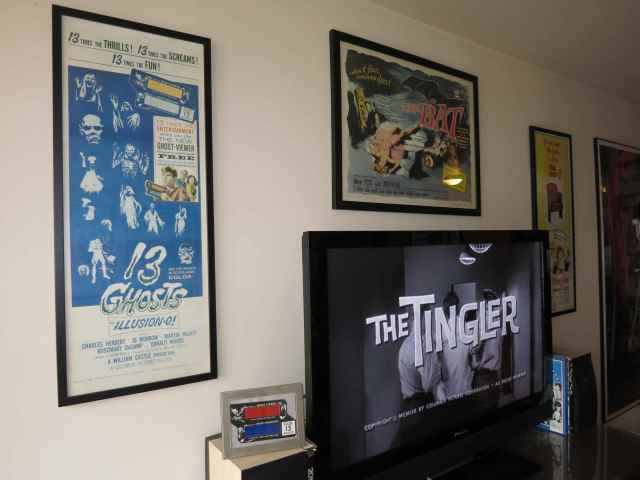 I'm a New York City-based writer, video producer, print journalist, radio/podcast host, and social media influencer. I've been a guest on Turner Classic Movies (interviewed by Robert Osborne), NPR, Sirius Satellite Radio, and the official TCM podcast. My byline has appeared in Slate.com and more than 100 times in the pages of NYC alt weeklies like The Villager and Gay City News. I'm also a social media copywriter for Sony's getTV and a contributor to four film-and-TV-related books: "Monster Serial," "Bride of Monster Serial," "Taste the Blood of Monster Serial," and "Remembering Jonathan Frid."
View all posts by willmckinley →
This entry was posted in Classic Film, Uncategorized and tagged THE TINGLER, Vincent Price. Bookmark the permalink.