Posted on September 19, 2013 by willmckinley

There’s only one Batman. And his name is Adam West.

West played the Caped Crusader in the iconic 1966-68 Batman TV series, one of the most creative and memorable programs in the history of the medium. I was too young to watch the first go-round on ABC, but I was there for the syndicated reruns — every day, seemingly, for my entire childhood.

With its rogues’ gallery of villains played by Hollywood stars of the 1940s and ’50s, Batman meshed perfectly with my developing taste for classic film. At the age of ten I loved Vincent Price both for his characterization of the villainous Egghead and for the creepy Edgar Allen Poe movies he made with producer Roger Corman during the 1960s. And those films, in turn, inspired me to seek out Poe stories in print. Everything is connected. That’s a fact that I believe more and more strongly as time passes.

But I was nervous about meeting Adam West. It was just a memorabilia show at suburban New Jersey hotel, but what if it didn’t go well? What if he was bitter about being best known for something he did almost a half century ago? What if I said something stupid, or if he dismissed me as just another balding, middle-aged weirdo desperate to get his autograph? A four-minute meeting that goes badly can erase four decades of good memories.

“Relax,” my girlfriend Maggie said. “You’re the least weird person in this place.”

“That’s only because you’re here,” I said.

And then it was my turn. There he was, sitting at a table, wearing sunglasses and a big smile.

“Adam West!” I exclaimed, as if I didn’t believe it, which I kind of didn’t. “This may be the most significant moment of my life so far.”

He looked at me and laughed in a completely charming and self-deprecating way.

“You look great,” I said, to the then-seventy-nine-year-old actor who does, in fact, still look absolutely great. “What’s the secret to your longevity?’

“Vodka,” he shot back  — a line that gets big laughs every time he uses it, I’m sure. And this time was no exception.

“Straight or on the rocks?” I asked, gladly playing the straight man.

“On the rocks,” he said. “Definitely on the rocks.”

At that moment, an elderly couple approached and Mr. West’s “handler” interrupted my conversation so they could have a brief, awkward chat.

One thing you should know about memorabilia shows is, the celebrities almost always have a handler with them. This person is usually a younger friend, fan or family member. The handler handles the ugly business of asking the autograph-seeker for money, making change and telling you what you can or cannot do with the celebrity you have been waiting your entire life to meet.

For example, Adam West’s handler had informed me that an autograph from Mr. West would cost $40. But if I wanted to take a picture with him, that would be an additional $20. To you, the objective reader, this sounds like a lot of money. And it is. But for better or worse this is what it costs and, for me, it was totally 100% worth it.

But I was glad to hand the $60 I was paying to meet Adam West to someone other than Adam West. Handing Batman three twenties in return for a lifetime of enjoyment would just feel wrong, in so many ways. How can you put a price tag on your childhood, on treasured memories of hundreds of afternoons spent in front of the television, jumping around and mock fighting with your sister, yelling “POW!” and “BAM!” like a crazy person?

And so, as Adam concluded his conversation with the very old man man and his wife, I took my position next to him for a photo.

“Even the elderly chicks dig you,” I said, as I genuflected beside my hero.

“I’m equal opportunity,” Adam quipped, as we posed for our picture.

“And speaking of women,” I said, as I stood up. “I’d like to introduce you to Maggie. She particularly enjoys your work on Family Guy and would also love to get your autograph.”

At that moment, on cue, Maggie pulled out the Mexican lobby card from BATMAN (1966) I had bought on eBay for this exact purpose. Because I’m a planner. Adam’s handler perked up.

“Mr. West will have to personalize that,” he said with an air of self-importance.

Here’s the thing. Some people come to autograph shows to get celebrities to sign things without personalization, for the express purpose of reselling those things. It seems like a lot of trouble to go through, for not a lot of profit, but people do it. And some of the bigger names (and yes, Adam West is a bigger name — at least in this little world) don’t allow it. And I don’t blame them one bit.

If money is to be made on them, they should be the ones to make it. Adam West spent thirty years waiting for the phone to ring after Batman ended it’s original broadcast run. He made little to no money on residuals. Pretty much all he did was autograph shows, cameo appearances, and cartoon voiceovers. It’s only now that he’s famous again for his work on Family Guy that he probably doesn’t need to worry about making the rent.

The only problem with this rule was, I hadn’t planned for it. I had instructed Maggie to ask Adam to just sign his name, to keep it simple. But now I had to quickly alter the plan.

“Who would you like Mr West to make it out to? Both of you?” the handler asked.

“Well, you never know,” I jumped in. “There’s always the chance we might break up.”

“I have a good feeling about you two,” Adam replied, as Maggie switched places with me. “I think you guys are going to be okay.”

Then he signed the lobby card “To Will and Maggie – Adam West.” And Maggie sat down next to him for a picture.

“Get in close,” I said to her, as I snapped away. “”Adam West deserves some sugar.” 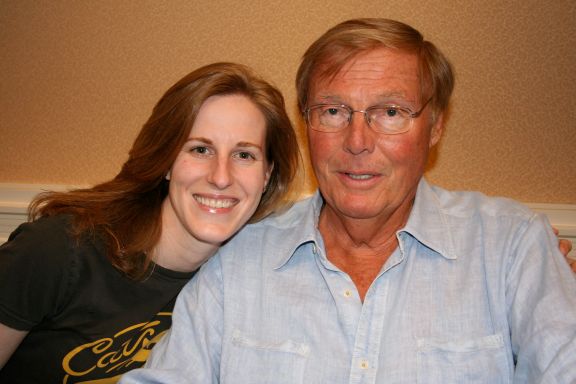 Adam laughed again, probably wondering what Maggie was doing with me (as many people do).  As she stood up, we bade him farewell.

“God bless you, Adam West,” I said. “You are a national treasure. America loves you. And I love you.”

I swear to God I wasn’t kidding. Not even a little bit.

More than five years later, Maggie and I are still together. And the autographed Mexican lobby card hangs in a place of honor in the apartment we share. And when people ask us why we haven’t gotten married after so many years together, I always tell them the same thing.

“Our union has already been blessed,” I say. “By Adam West.”

I'm a New York City-based writer, video producer, print journalist, radio/podcast host, and social media influencer. I've been a guest on Turner Classic Movies (interviewed by Robert Osborne), NPR, Sirius Satellite Radio, and the official TCM podcast. My byline has appeared in Slate.com and more than 100 times in the pages of NYC alt weeklies like The Villager and Gay City News. I'm also a social media copywriter for Sony's getTV and a contributor to four film-and-TV-related books: "Monster Serial," "Bride of Monster Serial," "Taste the Blood of Monster Serial," and "Remembering Jonathan Frid."
View all posts by willmckinley →
This entry was posted in Classic TV and tagged Adam West, Batman 1966. Bookmark the permalink.

20 Responses to Blessed by Adam West