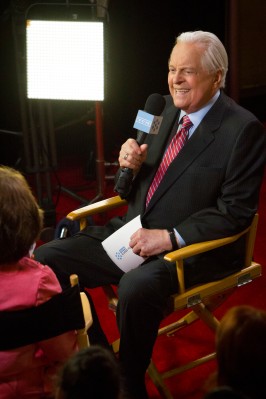 Every year I travel to Hollywood for the TCM Classic Film Festival and I think to myself, “This will be the year the magic finally wears off.” And then Robert Osborne walks in, and it feels like Moses has come down from the mountain.

That’s not hyperbole. The beloved TCM host is the spiritual leader of classic movie fans, guiding an estimated 25,000 followers to the Promised Land every spring for four days of film and fellowship. The recently concluded fourth installment was my favorite yet, and the closest this lapsed Catholic has come to a religious experience since, well, the 2012 TCM Film Fest. And at the center of it all is the hardest working octogenarian in show biz.

Supposedly, Moses was 80-years-old when he led the Israelites out of Egypt. Osborne turns 81 today, but you’d never know it if you meet him in person. The affable emcee spoke with film bloggers the day before the festival commenced, rocking a sharp gray suit, powder blue shirt and paisley tie, his full head of silver hair stylishly slicked back off his forehead. In a word, he looked classic.

In recent years, the face of TCM has been absent from the channel’s air for lengthy stretches (five months off in 2011 and four weeks in 2012) leading to concerns about his health. Fellow host Ben Mankiewicz has increased his primetime presence, and is doing an excellent job after a decade with the network, but even he acknowledges that there’s only one Robert Osborne. Still, some viewers couldn’t help but wonder if a succession plan was already in effect.

I’m happy to report that, to my eyes, Osborne looked and sounded better in person than he has in years. I sat six feet from him at the press conference and he seemed rested, relaxed and ready to run a marathon. And that’s what the festival is for Osborne – a marathon. He spends four days greeting fans, posing for pictures, signing autographs, interviewing celebrities, introducing screenings, recording interstitials for broadcast, and generally carrying the kind of workload that might daunt a man half his age. And he does it with style, wit, and a command of classic film knowledge that is without equal. His respect and affection for the fans is evident in his every interaction and was on full display during his remarks at the press event.

“There are a lot of people who feel isolated, like they’re the only person who loves old movies,” Osborne said. “They think they’re the oddball, but then they come to the festival and find out there are all these other oddballs just like them!”

The assembled bloggerati  laughed in unison. After all, many of us had flown across the country at great expense to see movies our friends and family wouldn’t watch on TV for free. And not only that, we’d all be tweeting about it for four days and writing about it for weeks to come. And for most of us, those efforts would be entirely a labor of love.

“In Los Angles, New York, Chicago or San Francisco, it’s not that rare to see these movies on the big screen,” Osborne continued. “But there are so many people in this country who never get a chance to do that. The real way to see a movie is the way it was meant to be seen – on a big screen, in a theater with other people.” 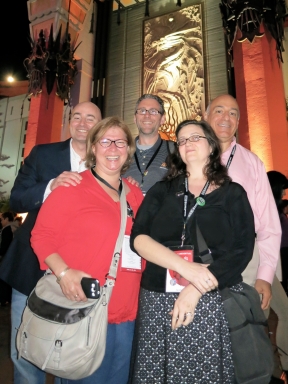 If you love the classics, it’s these “other people” who make the conclave such a memorable experience. In New York I’m spoiled by nearly a dozen venues in close proximity that regularly screen repertory titles. My girlfriend will accompany me now and then (if I beg, and promise her Milk Duds), but usually these are solitary experiences. The TCM Film Festival is designed to foster interaction, from the opening night party in the Blossom Room of the Roosevelt Hotel (site of the first Oscar ceremony in 1929), to trivia contests, to spontaneous conversations on queues outside the theaters (all of which are within walking distance). Over the years, many of these short-term interactions have grown into long-term friendships. And if you’re active in classic film circles on social media sites like Twitter, Facebook, or Tumblr, the TCMFF can feel like a reunion, an annual opportunity to gush in person with fellow fans – without a 140-character limit.

Of equal importance is the technical quality of the source material presented at the festival. If you’re flying thousands of miles to watch movies, you are officially a film buff. And most film buffs care passionately about how the movies they love look. In this regard, the TCM Film Festival consistently delivers, year after year.

“We are very adamant that the prints we show are the best possible,” Osborne told us. “There was a time when it didn’t matter how many scratches or splices a print had. You were just glad to see it. But we’ve been kind of spoiled since then. So to see (a movie) in anything but a beautiful print is really not acceptable to most people anymore.” 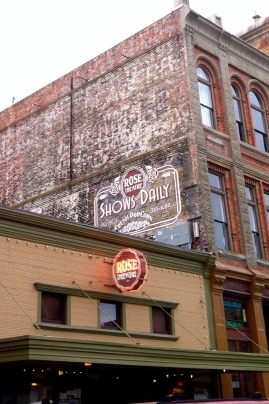 During the course of his 30-minute chat, Osborne revealed other nuggets that fans might not know. For example, the native of Colfax, Washington is the co-owner of the Rose Theater, a movie house in Port Townsend, near Seattle. The theater began life in 1907 as a Vaudeville house, added moving pictures in 1908, and closed in 1958. Fully restored, the Rose re-opened to the public in 1992, and added a second screen, the Rosebud, three years later. Both have recently added digital projection, so Osborne understands first-hand the challenges of the transition from 35 mm film.

“(W)e were told by Disney and, I think, Fox that they weren’t going to be making 35 mm prints anymore. So if you wanted a Fox or a Disney film, you had to have digital. For a small town theater, it costs about $32,000 for a digital machine. And we have two theatres,” he lamented. “We did raise the money, but it’s going to put a lot of the mom and pop’s out of business. Small town theaters are going to disappear more and more.”

He added, “It’s very sad because people love to go to the movies, and that’s going to be cut out for a lot of people.”

Osborne also addressed the planned renovation of the former Grauman’s Chinese Theatre on Hollywood Blvd – the flagship venue of the festival. As of this writing, work has already begun to transform that historic venue into one of the largest IMAX houses in the country while maintaining “the integrity of the building” and preserving “character defining features.” The TCMFF closing night screening of THE GENERAL will forever be remembered as the penultimate presentation in the theater’s 1958 configuration (the last major renovation, following the May, 1927 opening).

“I’m for anything they do in any city of any size that’s going to restore theaters and make them more relevant,” he said. “I have no idea what it’s going to be like or how it’s going to work. I just hope it works well. If it doesn’t work well, we just have to adjust to it and figure some place else.” 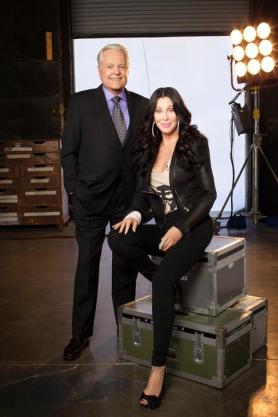 Osborne also raved about his recent work with the Academy Award-winning actress Cher on TCM’s new Friday Night Spotlight series, adding that she was “no diva” which he jokingly described as “a little disappointing.”

He also explained the film libraries to which TCM has access (Pre-1948 Warner Bros, RKO, pre-1986 MGM, certain United Artists titles, and others) and said that TCM is making greater headway with leasing films from Columbia Pictures, 20th Century Fox, and Universal.

“They’re letting us have their movies now where, at one time, they were very protective,” he said. “Because, if they show them on TCM, people will become acquainted with them and want to buy them. So they can make money off them. We don’t care what the motive is, we’d just like to have our hands on some of those movies.” 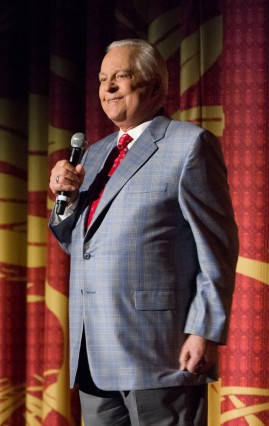 The longtime columnist for The Hollywood Reporter (1982-2009) and author of 80 Years of Oscar: The Official History of the Academy Awards also shared his thoughts on the censorship regulations of the Motion Picture Production Code (a favorite topic of mine) and the state of modern movies. (SPOILER ALERT: He thinks the classics are better. Duh.)

“I don’t think movies have been improved by the fact that you can do or say anything on screen you want to say. Because it’s now, a lot of times, in the hands of people who don’t have any taste and don’t know where the limit should be,” he said. “There were certainly bad things about the studio system, bad things about censorship, but there were some good things about it too. They made better movies then. I don’t think there’s anything like wit on film anymore.”

The final question posed to Osborne regarded the demographics of the classic film fans at the festival. It’s been reported that an estimated two-thirds of attendees are 49 or younger, a fact that the 81-year-old doesn’t find surprising.

“I think it came as a big shock to the bosses and the people at the channel that so many younger people were interested in these films. I think they thought it was only for people with gray hair,” he said with a smile. “And that’s great, because you know these movies are going to be looked after and looked at for a long time. And they’re going to teach their kids to enjoy these movies.”

And then, in closing, he added the following: “Hopefully it will go on forever. “

And hopefully, so will Robert Osborne. Remember, Moses lived to be 120.