Posted on January 2, 2013 by willmckinley 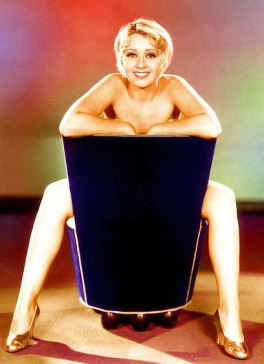 The year is 1931. Three undressed women catfight over the lover they share – wrestling in his bed, tearing at each other’s skimpy negligees. One of them is Louise Brooks, pansexual star of some of the sultriest silent films ever made. The other is pouty French dancer Yola d’Avril. The third is platinum-haired hottie Joan Blondell, whose tastefully topless publicity shots would be banned two years later by enforcers of the dreaded Motion Picture Production Code.

Sounds hot, right? And GOD’S GIFT TO WOMEN (1931, Warner Bros.) is hot, for approximately one of its 72 minutes. Then the object of these young ladies’ affections pokes his head out from under the sheets, and everyone watching goes “Huh?”

If the title was intended to be ironic, GOD’S GIFT TO WOMEN might have been a hilariously hip parody of a Lubitsch/Chevalier musical comedy. Alas it was not, so the funniest thing in this curious “bedroom farce,” now out on DVD from the Warner Archive Collection, is the idea that beautiful women want to go anywhere near the titular protagonist’s bedroom.

Most curious of all was the casting of 40-year-old, puffy-nosed Vaudeville comedian Frank Fay as a Parisian playboy inexplicably irresistible to women. I’ve never been to Paris, and I’m no expert on what makes men attractive, but I’m pretty sure suave Frenchmen don’t look like Irish bartenders from the Bronx. Best known today as Mr. Barbara Stanwyck, Fay is almost entirely charmless as Jacques “Toto” Duryea, ostensible “man of a million women.” And, as the supposed inspiration for drunken asshole Norman Maine in A STAR IS BORN, Fay was apparently equally distasteful in real life.

GOD’S GIFT TO WOMEN opens at Club Perroquet, a hot jazz joint with lots of drinking, smoking, and provocative Pre-Code posing from gorgeous girls in gam-hugging gowns. Top-hatted Toto tipples in with three sexy young things on his arm: Fifi (Blondell, in her sixth feature film) and the twins Maybelle and Marie (Eleanor and Karla Gutchrlein, credited as Sisters G). Close behind are Florine (Brooks) and Dagmar (d’Avril). All are married to other men, but still gaga over our not-so-handsome hero.

Toto bribes the maître d to dim the lights in the club so he can covertly cut in on Diane’s dance, but the down-to-earth damsel is unimpressed with his whiny wooing and leaves. This only inspires Toto to amp up his aggressiveness, and he begins to do engage in what would now be referred to as stalking. (”Everywhere I go you follow me!” Diane laments, like a guest on Maury.) Instead of securing a restraining order, Diane agrees to go to Toto’s apartment, where his bitchy sometime girlfriend Tania (Margaret Livingston, the “city girl” from SUNRISE) makes a less-than-timely appearance. Diane swears off Toto and his philandering ways, but he dons a succession of disguises to (illegally) gain access to her and, instead of having him arrested, she succumbs to his “charms.”

This does not sit well with Mr. Churchill, who is apparently as confused about Toto’s appeal as we are. Sensing that his daughter is about to throw her life away on a heartbreaker, Churchill sends his personal physician (Arthur Edmund Carewe) to examine the counterfeit Casanova. Ironically, Toto is the one who turns out to have a broken heart. After a not-particularly-thorough examination, he’s “diagnosed” with a fatal aortic aneurysm that will doom him to an early grave if he engages in stimulation of any sort.

“One kiss and you die!” the doctor lies, in clear violation of the Hippocratic Oath. “If you want to live you must emulate the tranquil existence of an oyster!”

Toto’s efforts to live like an asexual bivalve mollusk are complicated by his paramours, who insist on “nursing” him back to health by taking off their clothes and getting into bed with him. And this is where we came in, with Louise Brooks and company in their nighties.

Brooks, who reluctantly returned to Hollywood after starring in G.W. Pabst’s PANDORA’S BOX and DIARY OF A LOST GIRL in Germany, is tenth-billed and only in the film for a few minutes. But when she’s there, she makes it count. She doesn’t even sport the iconic bob hairdo she made famous though, oddly, the characters played by the Sisters G both do. Brooks, who has grown to become one of the most revered figures of the Silent Era, apparently didn’t have much clout at this point in her career, due to an ongoing dispute with Paramount. One of the many frustrations of GOD’S GIFT TO WOMEN is how underutilized she is in a film that desperately needed her talents. The same can be said for Blondell, who spends most of her time fawning over Fay in a manner that completely violates the hyper-realistic, straight-talking, self-assured character she would perfect throughout the gritty 1930s at Warner Bros. 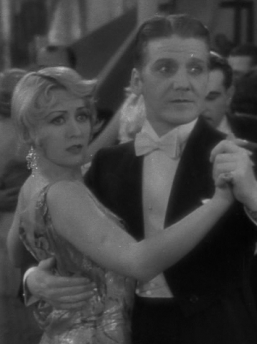 GOD’S GIFT TO WOMEN was directed by Michael Curtiz, best known for CASABLANCA (1942), wherein he transformed an actor not blessed with leading man good looks into one of the most romantic heroes in movie history. Why he was unable to do anything with Fay in this role is unclear, though the character becomes far more sympathetic after his bogus diagnosis. Fay is much better as a dimwit who believes he’s dying than he is as a confident lover, and only in the second half does the movie become the slapstick farce it should have been from the get-go.

This lack of narrative consistency may be attributable to “too many cooks syndrome,” with four different writers credited. The film was “suggested by” the play The Devil Was Sick by Jane Hinton, but the opening title card gives full story credit to Frederick Hazlitt Brennan, a scenario writer who got his start as a St. Louis crime reporter. “Screenplay and dialogue” are attributed to Joseph Jackson (who also wrote the delightfully lurid SAFE IN HELL for Warners’ subsidiary First National) and Raymond Griffith, the former top-hat wearing silent comic whose acting career was cut short by talkies. There were also apparently songs written and shot for the film that were cut for the American release, but survived in foreign versions (now lost).

One of the few indications of the film’s genesis as a musical is the presence of the dance duo Sisters G in two strangely small, non-speaking roles. I assume they featured more prominantly in excised musical numbers, such as the opening scene in the club, which fades to black when a dance sequence begins. Another piece of evidence lies in the scene where Fay and La Plante sit down to tea in Toto’s apartment. Both speak in a cadence that suggests they may break into song, but the scene is cut short.

Engaging in this sort of amateur cinematic forensics is one of the things I enjoy most about Pre-Codes. Often the investigations relate to sequences that were selectively censored for regional audiences, or cut outright to achieve certification for post-Code re-releases. While GOD’S GIFT TO WOMEN has not been restored by Warner Archive for this manufacture-on-demand DVD, it’s pretty clear that, at some point in the film’s history, missing snippets once excised by censors were reinstated. While the quality of the transfer is generally decent for an obscure, early ’30s release, the most heavily damaged scenes are the ones that obviously violate the Code.

If, like me, you’re fascinated with Pre-Code film, GOD’S GIFT TO WOMEN is a must-see. If you’re not, I suggest you save your pennies for something less curious, preferably something without Frank Fay. 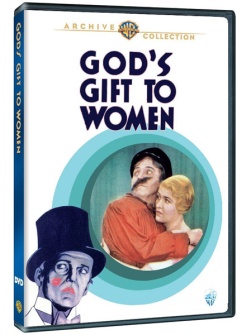 7 Responses to GOD’S GIFT TO WOMEN (1931) from Warner Archive: One Kiss and You Die!