We Belong Dead: Why FRANKENSTEIN Looked Horrific on the Big Screen

I saw James Whale’s FRANKENSTEIN (1931) and BRIDE OF FRANKENSTEIN (1935) at the AMC 25 on 42nd Street in New York City on Wednesday night. And, while the experience of seeing two beloved classics with a room full of fans was ultimately a positive one, the screening was, at the same time, immensely frustrating.

Part of the TCM Events Series from Fathom Events, this double feature was presented in more than 500 theaters nationwide, the third in a series of four programs celebrating the 100th anniversary of Universal Studios. The series kicked off on September 19 with Alfred Hitchcock’s THE BIRDS (1963), continued with Steven Spielberg’s E.T. THE EXTRA-TERRESTRIAL (1982) on October 3, and concludes with Robert Mulligan’s TO KILL A MOCKINGBIRD (1962) on November 15.

This was my sixth experience with classic films presented on the big screen by Fathom Events. My first two were the the 70th anniversary screenings of CASABLANCA in March and in April, followed by SINGIN’ IN THE RAIN in July, THE BIRDS last month, and a screening of David Lean’s LAWRENCE OF ARABIA on October 4, which was not affiliated with TCM.

It seems I leave every TCM Fathom screening (including last night) with pretty much the same feeling: it’s great to see a classic film in a theater filled with enthusiastic fans, but why do the movies have to look so awful?

Last night, the capacity crowd at the AMC 25 was great: reverently silent during FRANKENSTEIN and loud and raucous during THE BRIDE OF FRANKENSTEIN, which is appropriate, considering the sequel’s subtly comic tone. My audience even cheered the first appearance of Una O’Connor in BRIDE. I didn’t know any of the 254 other people who were in theater 17 at the AMC 25, but that fact alone made me love all of them. They even applauded when Robert Osborne appeared on screen to kick off the TCM-produced, 15-minute introductory segment featuring Bela Lugosi, Jr., Sara Karloff and Academy Award-winning makeup artist Rick Baker. And, in a theatrical presentation that lasted nearly three hours, nobody pulled out a cell phone. Clearly, these were my people.

But we weren’t there to hang out with each other (even though I got hit on by a friendly white-haired guy who offered to buy me a “pretzel or a slice of pizza,” which I graciously declined). We were there to see two iconic films that should look better than ever, thanks to restoration efforts by Universal, in honor of the studio’s centenary. The recently released Universal Classic Monsters: The Essential Collection (which was advertised during the pre-show) features the best versions of these two films that have ever been available to the public.

And yet, what we all paid $15 to see on the big screen Wednesday night at the AMC 25 didn’t even look as good at what we could have watched at home on our TV sets.

FRANKENSTEIN, in particular, looked horrendously murky. The opening sequence with Dr. Frankenstein (Colin Clive) and Fritz (Dwight Frye) grave-robbing by lamplight was almost impossible to see, as was anything shot in low light, including many key scenes in the castle. BRIDE had generally better image quality, but it was still disappointing. This has been my complaint at every screening I’ve seen in Fathom’s TCM Event Series: great crowd, poor image quality.

But LAWRENCE OF ARABIA was another matter entirely. Whereas the projection in the TCM Event Series screenings I’ve attended has generally looked dark, soft and noisy, David Lean’s epic looked bright, sharp and flawlessly stunning when I saw it at the AMC Village 7 on 3rd Avenue on October 4. I watched FRANKENSTEIN, BRIDE and SINGIN’ IN THE RAIN at AMC theaters using 4k projectors, just like LAWRENCE. So why did LAWRENCE look so much better than the other movies? What’s the difference?

The answer lies in the delivery method.

All the screenings in the TCM Event Series are delivered to theaters via satellite as High-Definition video, in roughly the quality of a movie you’d watch in HD on HBO. These satellite transmissions are likely compressed 1080i images (which means the signal is skipping every other field within a frame), unlike Blu-ray, which is full 1080p. In addition, the file transmitted by Fathom is likely compressed on the upload, uncompressed on the download by the local theater, and then re-compressed when it’s recorded to the venue’s Digital Video Recorder. Theaters that lack a DVR may broadcast a live satellite transmission from Fathom, which skips a few steps in the compression chain, but is still no better than broadcast TV quality – and possibly worse, if it’s projected on a 2K projector (as was the case when I saw CASABLANCA in New Jersey in March) on a giant screen.

Add in all manner of other variables like the quality of the source material, the file format and bit rate, and the technical specs of each individual theater, and you have a screening medium that completely lacks any true, empirical standard.

LAWRENCE OF ARABIA, however, was delivered to 630 individual theaters on physical hard drives, not via satellite. (This fact was confirmed on Twitter, to me by Fathom, on September 10.) In addition, according to Fathom’s website, “the original 65mm camera negative was first scanned at 8K” (8,000 lines of horizontal resolution) for the restoration by Sony Pictures, then “went through a 4K color grading and re-mastering process” before distribution as DCP (Digital Cinema Package) files for theatrical projection. As you probably know if you’re a movie fan, almost every current, major studio theatrical release is distributed in this manner – in DCP on hard drives.

This is the difference: LAWRENCE OF ARABIA was professionally mastered from top-of-the-line source materials, hand-delivered to theaters in a predictable, industry standard format, and projected with consistently high quality at every theater – with only slight variations (2K projection in some lower-rent theaters vs 4K). The FRANKENSTEIN/BRIDE double feature was delivered via satellite in TV quality, using a model that heaps compression upon compression, and leaves way too many quality potholes on the road to your local screen.

My question is, why?

If Universal has restored FRANKENSTEIN and BRIDE OF FRANKENSTEIN (along with 6 other classics from the studio’s monster oeuvre) for the Blu-ray release, why were these films not provided to theaters in a format that would present them in the best available quality? Is LAWRENCE OF ARABIA somehow more worthy than FRANKENSTEIN? Is it more worthy than CASABLANCA, or SINGIN’ IN THE RAIN, or THE BIRDS? And, if it is, why didn’t the admission price at my theater reflect the differences in the delivery method?

This makes absolutely no sense. And, while I have complained about this before, Fathom Events altering their normal delivery method for LAWRENCE is a tacit acknowledgment of the quality difference. If it isn’t, why not deliver LAWRENCE via satellite?

And, if the distributor tacitly acknowledges the unfortunate truth – that the distribution method for the TCM Events Series is sub-par – why do they and Turner Classic Movies insist on touting the image quality of these releases in their promos and on their websites? The promotional video on the Fathom website refers to FRANKENSTEIN and BRIDE as “newly restored.” E.T. is described as a “newly remastered version made for the big screen.” SINGIN’ IN THE RAIN is “fully remastered and more beautiful than it has ever been before.” And CASABLANCA‘s “stunning digital transfer” is described as “looking better than ever.”

To be clear: making any reference to superior or restored image quality in any promo or on any website promoting the TCM Events Series distributed via satellite by Fathom Events is, at best, misleading and inaccurate. At worst, it’s just plain dishonest.

Did I have a good time at the FRANKENSTEIN double feature? You bet, and so did everyone else in that theater, and probably everybody else in every theater around the country. Does that change my opinion on this topic? Not at all. Just because you don’t get caught doesn’t mean it’s not wrong.

“To a new world of gods and monsters,” Pretorius toasts Dr. Frankenstein in one of the signature moments from THE BRIDE OF FRANKENSTEIN. The post-35 mm film paradigm is a new world too, and one in which movies presented digitally must be treated with the same reverence that celluloid was afforded in the first century of cinema. If not, this monster may end up destroying us all. 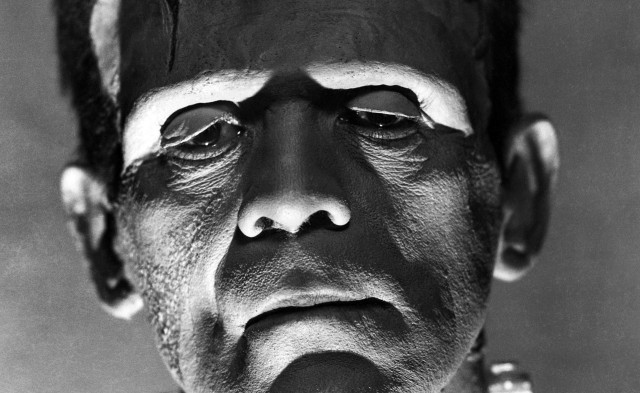 47 Responses to We Belong Dead: Why FRANKENSTEIN Looked Horrific on the Big Screen