Today’s screening of SPEEDY (1928) at Film Forum was delightful, with a sold out house, lots of enthusiastic kids and some special guests.

The program began with LOOK PLEASANT PLEASE (1918), a one-reel short recently “rediscovered” and restored by the The Harold Lloyd Trust. Following the short, author John Bengtson presented a 17-minute animated slide show, with “then and now” comparisons of SPEEDY’s locations – a few of which are just steps away from Film Forum.

Bengtson seemed remarkably undistracted by the crying baby sitting next to me, who clearly didn’t understand the meaning of “silent movie.” She did understand how to kick though, and demonstrated that often.

After the screening, Film Forum Repertory Director Bruce Goldstein led the audience in a sing-along of Speedy Boy, the 1928 pop hit written by Raymond Klagas and Jesse Greer.

It’s not clear to me if this theme was used by local theater organ /piano players when they accompanied the film in 1928 , or if it was just meant to capitalize on the film’s success. Either way, I hope nobody minded when I acted out the “hand trumpet” portion of the song.

By the way, the original score performed by longtime Film Forum accompanist Steve Sterner was excellent, and almost made me forget the catchy Carl Davis score that is featured on the version TCM airs.

The sing-along concluded with a big finish. It’s safe to say that somebody at Film Forum has a future in illustration.

After the show, John Bengtson signed copies of his book, Silent Visions: Discovering Early Hollywood and New York Through the Films of Harold Lloyd, in the Film Forum lobby.

We chatted about how Lloyd established “the glass character” (as his persona has come to be known). Then I asked if he would pose with his book because, if I ever write a book, I will pose with it all day, every day – as if to say, “See? I wrote a book!” 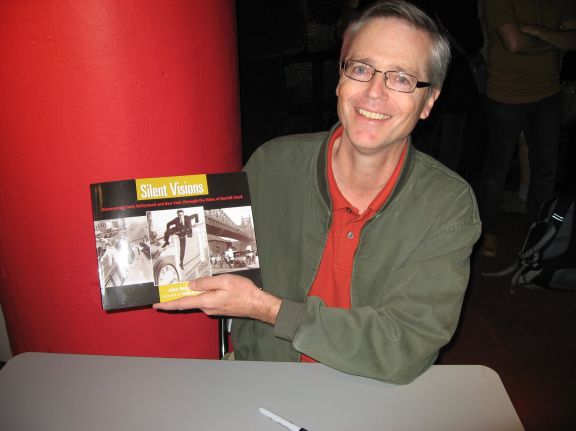 After the screening, Bruce Goldstein revealed that we had been joined by a very special guest – 83-year-old French filmmaker Pierre Étaix, who was in town for the launch of Film Forum’s 12-day retrospective of his films. Étaix, who told me on Friday night that Lloyd was among his biggest influences, pays homage to SPEEDY in his Oscar-winning short HEUREUX ANNIVERSAIRE (1962). Étaix’s character in that film buys flowers for his wife, only to have them “beheaded” by the sunroof of a car. Lloyd does a similar gag in SPEEDY. Both are delightful, and it was thrilling to meet and interact with Étaix in person. 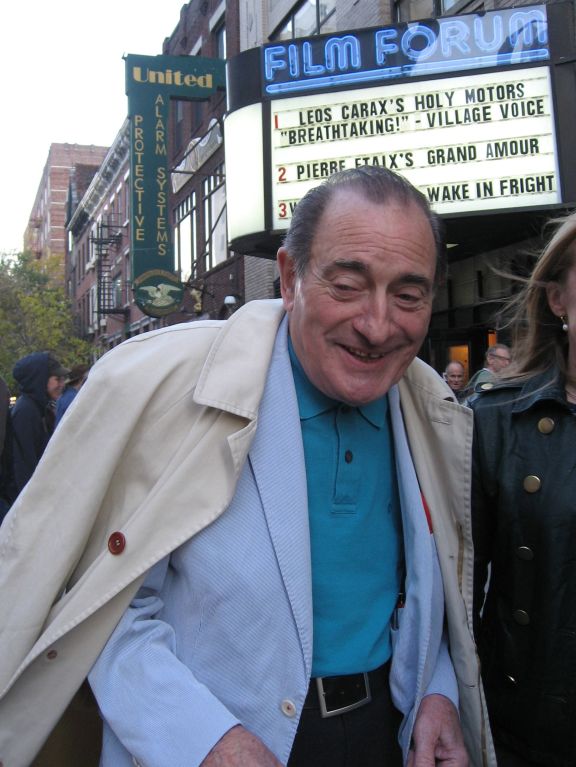 SPEEDY plays once more, on Monday at 7:30 p.m. If you missed today’s show, I suggest you hop on your horse-drawn trolley and get there.

4 Responses to Screening Report: SPEEDY (1928) at Film Forum with John Bengtson, Pierre Etaix and a Sing-along!