I’m a late – but tirelessly enthusiastic – convert to silent movies. 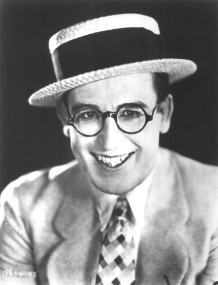 Though I’ve always been familiar with Harold Lloyd’s bespectacled visage, my introduction to the films of the so-called “third genius” of silent comedy came just a few years ago. My first Lloyd feature-length comedy was his final silent masterpiece: SPEEDY, produced by his own Harold Lloyd Corporation in the summer and early fall of 1927 and released by Paramount on April 7, 1928.

Thanks to Film Forum, the venerable New York City revival house, I’ll get a chance to see the film again this weekend – on the big screen, with live piano accompaniment and a very special guest.

Prior to the screenings of SPEEDY (in 35 mm) on Sunday, October 21 and Monday October 22, film historian John Bengtson will present an animated slide show tour of the movie’s shooting locations in Manhattan, Brooklyn, and the Bronx. And following the film, he’ll be signing copies of his delightful 2011 book, Silent Visions: Discovering Early Hollywood and New York through the Films of Harold Lloyd

“Harold used Los Angeles and New York like his own personal playgrounds,” Lloyd’s granddaughter Suzanne writes in her introduction to Silent Visions. And the book bears this out. With archival images from Lloyd’s short subjects and features (1915-1932) placed side-by-side with current shots of original locations, Bengston uses cinematic archeology to trace the development of a star “more prolific than Charlie Chaplin and more popular than Buster Keaton” during the golden age of silent movies.

Bengston, who’s also written seminal works on Chaplin (Silent Traces) and Keaton (Silent Echoes), says SPEEDY represents “New York’s most prominent role in a major silent film.” And a preview of his Film Forum presentation, posted on his blog, demonstrates that many of SPEEDY’s locations are still extant. In fact, key locations of the climatic final chase scene in the film – Sheridan Square, Washington Square Park and Union Square –are just a short walk from the theater.

Director Ted Wilde (who received a 1929 Academy Award nomination for SPEEDY and died tragically of a stroke later that year), uses the Five Boroughs as backlot, as he drags Lloyd from the Battery to the Bronx and just about everywhere in between. Unlike other films in which Nebraska native Lloyd plays a milquetoast who ultimately learns to be heroic, Harold “Speedy” Swift is true New Yorker from the get-go, with all the requisite brashness and hustle. He may not always be smooth, but he’s nobody’s rube. And SPEEDY is infused with a Big Apple sensibility, from the very first intertitle: 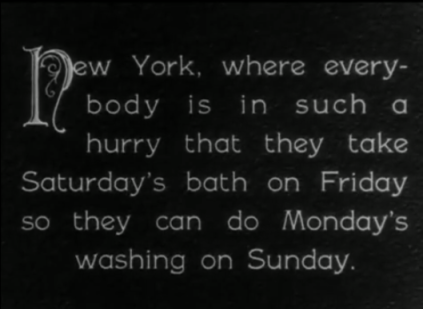 Relieved of his duties as a soda jerk because he’s more interested in baseball than his job (who isn’t?), Speedy embarks a promising new career as a cabbie. When he discovers that Babe Ruth will be visiting children at an uptown orphanage, Speedy parks outside in hopes of bagging the Bambino as a fare. His plan works, but his madcap chase from Manhattan to the Bronx almost gives the slugger (and the audience) a heart attack.

Our hero finally delivers Ruth to (original) Yankee Stadium on time, catches a glimpse of Lou Gehrig, and gets a chance to watch the Sultan of Swat hit his 54th homerun of the 1927 season. (This blog post does some fascinating forensics to determine the actual date Lloyd shot these scenes.) 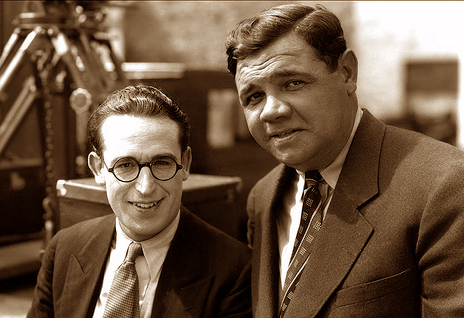 Soon after, some evil One Percent’ers set their sites on the last horse-drawn carriage franchise in the city – which just happens to be owned by Speedy’s girlfriend’s grandpa (Bert Dillon). The bad guys hijack his trolley and it’s up to Speedy (and a motley crew of grizzled Civil War veterans) to get it back on track within 24 hours, lest Pop lose his license. I won’t give away the ending, but you can probably guess how things turn out.

SPEEDY is a start-to-finish delight for New Yorkers and those who are fascinated by the city’s history. Particularly of note is a vignette with Speedy and his girlfriend Jane (an adorable Ann Christy) on a crowded subway (some things never change) and a lengthy, almost documentary-like sequence set at Coney Island. With footage shot on-location at the late, lamented Luna Park and the Steeplechase, the Coney Island set piece is a remarkable time capsule of a bygone era. It also looks like a personal injury attorney’s dream. 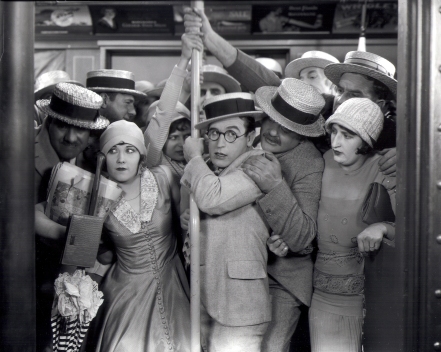 SPEEDY is the ninth installment in Film Forum’s on-going Harold Lloyd Festival, eight of which have featured original scores performed on piano by accompanist Steve Sterner. The series kicked off August 27 with HOT WATER (1924) and MOVIE CRAZY (1932), one of only a handful of talkies the comedian made in the 1930s (and, as such, not accompanied by Sterner). That screening was introduced by Suzanne Lloyd and her daughter Jackie (who proudly sports a tattoo of her great-grandfather’s iconic glasses on the back of her neck).

Raised on the sprawling Greenacres Estate by her grandfather (whom she called Dad) and grandmother, Suzanne was selected by Lloyd at age 19 to manage his image and legacy, including the largest privately held film library in the world. The Harold Lloyd Trust has recently begun restoration efforts on the comedian’s early short subjects, one of which will be screened along with SPEEDY this weekend. LOOK PLEASANT PLEASE (1918) features an early appearance of the “glass character,” the instantly recognizable persona Lloyd developed after sporting a Chaplin-esque mustache in 60+ Lonesome Luke shorts for producer Hal Roach’s Rolin Film Company. It was at Rolin that Lloyd met Mildred Davis in 1919. She became his real life leading lady in 1923 after they starred together in SAFETY LAST.

“If it wasn’t for that I wouldn’t be here!” Suzanne Lloyd joked to the opening night crowd at Film Forum. “To be able to show (these films) here is very special. I know my grandfather would have loved this.”

To listen to John Bengtson discuss Silent Visions on a recent episode of The Commentary Track podcast, click here.