Phyllis Diller was a pioneer in the art of stand-up comedy. Beginning on radio in the early 1950s and moving to clubs mid-decade, Diller played rooms that had literally never featured a female unless she was taking off her clothes. Diller’s act was riddled with self-deprecation, but the sheer fact that she was on that stage at that time earns her a place in American performing arts history.

But if you’re 40-ish (or younger, thanks to reruns), the first place you saw Phyllis Diller is likely to have been in a cartoon.

The cast for these special hour-long “movies” was hilariously eclectic – a WTF? combination of pop stars, club comics, deceased comedy teams and cast members from current or in-development Hanna Barbera cartoons. Davy Jones, Don Knotts, “Mama” Cass Elliott from the Mamas and the Papas, Laurel and Hardy (long after they both had died) and the Harlem Globetrotters were all featured in these delightful mysteries.

The episode with Diller was a favorite of mine. 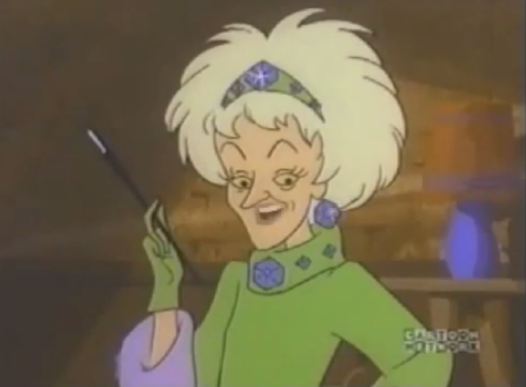 In A Good Medium is Rare, episode six from the first season, Diller plays a rich woman with an extensive jewel collection that’s coveted by thieves who (spoiler alert!) dress up as ghouls. She also manages to slip in a few punchlines, in typical Phyllis Diller style.

Rest in peace, Miss Diller. You were a true original.

I'm a New York City-based writer, video producer, print journalist, radio/podcast host, and social media influencer. I've been a guest on Turner Classic Movies (interviewed by Robert Osborne), NPR, Sirius Satellite Radio, and the official TCM podcast. My byline has appeared in Slate.com and more than 100 times in the pages of NYC alt weeklies like The Villager and Gay City News. I'm also a social media copywriter for Sony's getTV and a contributor to four film-and-TV-related books: "Monster Serial," "Bride of Monster Serial," "Taste the Blood of Monster Serial," and "Remembering Jonathan Frid."
View all posts by willmckinley →
This entry was posted in Classic TV, In Memoriam and tagged Phyllis Diller, Scooby Doo. Bookmark the permalink.